The presidential library named after bill Clinton published transcripts of conversations between the leaders of Russia and the USA from 1996 to 1999. 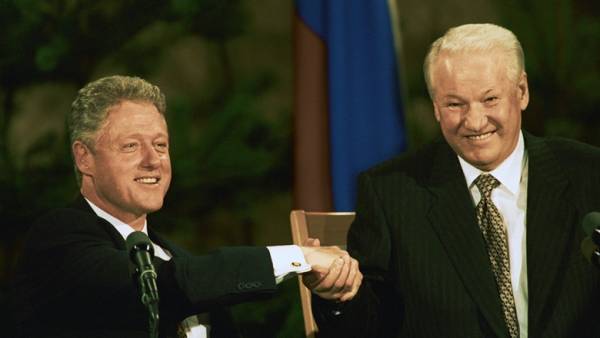 Available on the website of the Presidential library of bill Clinton is a compilation of transcripts of telephone conversations and personal meetings with former Russian President Boris Yeltsin and former U.S. President bill Clinton occupies almost 600 pages. TASS leads the most interesting, important and even funny moments from conversations between the two leaders.

The Communists and fight against them

Boris Yeltsin: “I have clearly set the task to win in the first round. So I would ask you in advance not to accept Zyuganov”.

Bill Clinton: “You don’t have to worry about that. We spent 50 years to achieve a different result”.

The head of the CPRF Gennady Zyuganov won the presidential election in second place, with the support of just over 40% of voters. And by “the other” the US President was referring to the lack of interest of Washington to Russia once again led by Communist.

Queries about the election of Yeltsin

Boris Yeltsin: “I Have one more question, bill. Please don’t misunderstand me. Bill, for my campaign I need urgent loan to Russia of $2.5 billion.”

Clinton asked, it does not help Russia’s rescheduling of its debt to the Paris club. Yeltsin explained that no. The US President promised to “check out”, whether so it actually.

Boris Yeltsin: “Thank You, Bill. I think it would be a good idea to have experts from the USA could come for consultations at the surgery.”

Boris Yeltsin: “Your doctors are good to excellent experts. They have done a lot. They were always there before, during and after surgery. I will never forget what you did for me.”

The President of Russia has successfully conducted heart surgery on November 5, 1996.

About the nuclear “football”

Clinton and Yeltsin discussed the American “nuclear briefcase”. The Americans call it “the ball” because it is a bag shaped like a ball for American football.

“let’s Talk about rockets” that Putin has proposed Trump

Bill Clinton: “I Hope that none of us will have to play with these toys”.

Boris Yeltsin: “I actually took part in exercises with the Russian “ball”. They suggested including the launch of the warhead to the Kamchatka Peninsula… What if we didn’t have to keep your finger on the “button” all the time? We have enough other ways to stay in touch with each other. They always know how to find us. Perhaps we should agree that we don’t need all the time to carry a “suitcase”.

Bill Clinton: “well, I’ll think about it. Although, of course, we wear [not the case] codes and protected the phone”.

Boris Yeltsin: “Yes, and we’re the only two leaders who have to do it.”

The expansion of NATO to the East

Boris Yeltsin: “One thing is very important: the extension should not affect the former countries of the USSR. I can’t sign any agreement without this language. Especially Ukraine. If you drag, it will create difficulties in our negotiations with Ukraine on a number of issues.”

Bill Clinton was to persuade Yeltsin that the wording is not needed. Signed on may 27, 1997 an Act of the NATO-Russia never took into account the wishes of the Russian President.

About beauty and women

Boris Yeltsin: “I would prefer that I tell women.”

At the summit “the Big seven” in Denver began the transformation of the G-7 to G-8. Russia’s participation in the “Big eight” was suspended in 2014 after the reunification of the Crimea with Russia.

The bombing of Yugoslavia

Boris Yeltsin: “For me it’s a big disappointment, bill. We moved towards each other for so long. We did so much. I agreed with the state Duma about SNV-2, and April 6, it had to ratify it. But now, under these conditions, it’s not happening.

Easy to throw bombs. Another thing — a long search for constructive political solution to the situation. But this is the only correct approach. If we join forces, we will be able to force Milosevic (former President of the Federal Republic of Yugoslavia, Slobodan Milosevic — approx. TASS) to change the behavior. Their Parliament has already taken the necessary steps yesterday.

Bill Clinton: “well, let me say this. I am convinced that we must not abandon diplomacy. After…”.

Boris Yeltsin: “of Course we will talk to each other. But no longer is such a powerful driving force, and this friendship that was between Tami. This is the end”.

On the meeting of Yeltsin with a bear

Boris Yeltsin: “I left the bear alone. It was exciting. He was only 20 meters away from me. You should be able to shoot well — right in the heart. (Imitates bear). I love to hunt ducks, but not when they are just sitting in the water. The real test is when they are in the air. Compared to this, to ratify the start-2 simple!

On the Kamchatka Peninsula, photographed the bear-aesthete

You know, bill, people say that we lose trust in each other that our partnership goes in a circle. Let everyone know that everything is fine between us. Given the policy which you pursued in relation to Russia the last five years, you can’t lose, and for the remaining time of the presidency can get yourself more points.

As for me, I am criticized that I’m too inclined in front of you. I have always called a Westerner.

Bill Clinton: “Time will put everything in its place”.

In the original Clinton says “Time will bear you out”, using the verb is homonymous to the word “bear”.

Boris Yeltsin: “no doubt, there are new contacts and meetings between you and Vladimir Putin, the Chairman of our government in Auckland, New Zealand… Soon in a few days you will meet with Mr Putin. I would like to briefly tell you about it so you know what kind of person he is. It took me a long time to think about who could become President of Russia in 2000. Unfortunately, at the time, I could not find a suitable candidate.

Eventually I met him [Putin], have studied his biography, his interests, his environment, and so on. I found that this solid man who is aware of everything that happens under his control. But he’s also thorough and strong, very communicative. He can easily establish good relations and contacts with people, who are its partners. I’m sure you’ll see him as a very qualified partner.

I am convinced that it will support as a candidate in 2000. We’re working on it.

Bill Clinton: “This is very good news. Wanted to say that so far we have had good relations with Mr Putin, and I look forward to our meeting in Auckland. After, we will maintain a very close relationship. Thanks for calling Boris”.

About the hardness, the mind and the inner core of the future Russian President

Bill Clinton: “Who will win the election?”.

Boris Yeltsin: “Of Course, Putin. He is the successor of Boris Yeltsin. He is a Democrat, and he knows the West.”

Boris Yeltsin: “He’s solid. He has an inner core. It is solid inside. And I will do everything to win within the law, of course. And he will win. You will do things together. He will continue the Yeltsin line in the area of democracy and economy, and expands Russian contacts. He has the energy and SMARTS to succeed.”