Killed the head of the DND Alexander Zakharchenko. The main thing

What is known about the explosion in Donetsk. 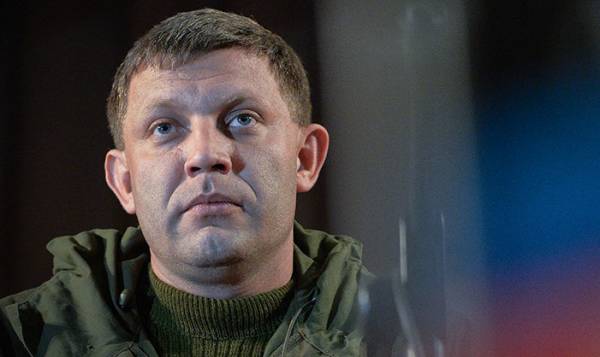 The head of DNR Alexander Zakharchenko was killed in the center of Donetsk. The explosion occurred near the residence on Friday evening, August 31. The government of the breakaway Republic has described the incident as a terrorist attack. The suspects, according to sources, Ukrainian saboteurs. Read more in the material of the portal iz.ru.

On Friday, August 31, “Donetsk news Agency” reported on the explosion in the Central part of Donetsk. It occurred about 17:30 GMT on the Boulevard of Pushkin in the center of the restaurant is “Separable”, located near the residence of the head of the self-proclaimed Donetsk national Republic (DND) Alexander Zakharchenko.

At that time, according to the Agency, the territory of the institution has been surrounded by police and around it were several ambulances.

It was initially reported that the incident injured one person was taken to the hospital. After a few minutes the sources have other data: three injured, one dead. Names are not mentioned. After there is evidence that among the wounded — Alexander Zakharchenko. And he received fatal injuries, told REN TV.

According to sources in law enforcement agencies of the breakaway Republic, Zakharchenko died from his injuries. This information was confirmed by Deputy of people’s Assembly of the DPR Council Vladislav berdichevskiy, as well as the press Secretary of the head of the Republic Alena Alekseeva.

There are also new details about what the explosion in a cafe in the centre of Donetsk were injured by the head of the Ministry of Finance DND Alexander Timofeev.

Who is to blame

Security services of the Republic has described the incident as a terrorist attack. In an interview with “the Donetsk news Agency” the representative of the administration said that “Zakharchenko was killed in a terrorist act.” No details law enforcement agencies have not yet reported. According to preliminary data, near the cafe detonated a powerful explosive device.

Law enforcement officers have detained suspects in the bombing:

Detained several people, the Ukrainian saboteurs and their associated persons who are suspected of involvement in the assassination of the head of the Republic.

According to him, the suspects were intercepted as they were driving along the Avenue of Bohdan Khmelnytsky.

The on-site restaurant, where the explosion occurred, the fire. On the spot rescue work, explosives experts, medics and other emergency services. According to information from the scene, covered part of the stadium and the Komsomol prospectus.

Alexander Zakharchenko at the time of death was 42 years old. The head of the DNI — a native of Donetsk, where he graduated from the College of industrial automatics on a speciality “mining electrician”. Subsequently, I entered the Donetsk law Institute of MIA of Ukraine, but did not finish it.

He started his career as a worker at the mine. Then changed the manual labor for the enterprise, however, the coal industry. In 2010, Zakharchenko, head of the local branch of Kharkiv public organization “Stronghold” and established on the basis of the battalion until the fighting intensified in Ukraine.

During the change of power in Ukraine, he immediately joined the people’s militia, which was formed in the Donetsk region, along with him stormed the local administration building in April 2014. 11 may of the same year he held the post of military commandant of Donetsk after a referendum on the independence of the DNI, then became Deputy Minister of internal Affairs of the Republic. Subsequently was appointed first Chairman of the Council of Ministers. For the post of head of the Republic was elected in the elections, receiving more than 77 percent of the vote.

Zakharchenko has repeatedly participated in the fighting, at the same time was Supreme commander of the armed forces of the Republic. He represented the interests of the DNI in the negotiations in the “Normandy format” on settlement of the situation in the region. His signature under the document on a set of measures to implement the Minsk agreements.

Alexander Zakharchenko has a wife and four sons.

What was the reaction of the authorities

The official representative of Russian foreign Ministry Maria Zakharova said that the Russian authorities see the murder of the head of the DPR as a terrorist attack. The diplomat stressed that it is necessary to conduct a full investigation:

The international community must demand, and given the puppet of the political system of Ukraine, and to supervise an impartial investigation of this crime committed in front of civilians.

Kiev has already aggravated the situation in the region, which is so difficult. “Not keeping the promises of the world, apparently, decided to go to the massacre (the contact group on settling the situation in Ukraine signed a “school truce” on August 29. — Approx. iz.ru),” added the spokesman.

Kiev reacted to the murder Zakharchenko

The press Secretary of the Ukrainian security Service (SBU) Elena Gitlyanskaya, commenting on the death of Zakharchenko, called it “internecine wars”. Kiev denies any involvement in the incident and did not rule out that it’s Moscow.

“We do not exclude attempts of the Russian special services also eliminate the odious figure which we have information, prevented the Russians was unnecessary,” — said the head of the office of the head of Department Igor Guskov.

“Donetsk will avenge this crime,” — said the representative of DND in the contact group on Ukraine Denis Putilin.

The death of Alexander Zakharchenko is a tragedy. His death will negatively affect the settlement of the situation in the South-East of Ukraine, said the Chairman of the Federation Council Committee on international Affairs Konstantin Kosachev. He stressed that the head of the DNI is a very sincere and courageous man who “gave this life in the name of freedom and security of his countrymen”:

When crimes are committed, especially acts of terrorism, as in this case, it is very important not to interfere with the investigation hasty and categorical reasoning. Now one thing is clear — those who did, have no interest in a peaceful and political solution to the conflict in the Donbass.

Chairman of the Presidium of the Council on foreign and defense policy of Russia Fyodor Lukyanov considers the murder of Alexander Zakharchenko as a possible trigger for future hazardous events. “The fact that the Minsk process was at a standstill, has long been known. Like the fact that the resumption of hostilities would, at least, certain groups on both sides of the line of demarcation,” — said the expert.

Member of the Council for interethnic relations under the President of Russia Bogdan Bezpalko suggested in an interview with RIA Novosti that the Ukrainian government can use the incident for escalation of the conflict. Murder Zakharchenko — the work of the SBU, I am sure in turn, the former Director of the FSB, state Duma Deputy Nikolai Kovalev:

Methods of terror to achieve any political goals impossible, it is world practice. But it would be strange if the West does not react to the situation associated with the increase in terrorist activities in Ukraine.