MOSCOW, 31 Aug — RIA Novosti. The presidential amendments to the bill to change the pension system can go to 12 September, to the meeting of the working group of the state Duma, told journalists the Chairman of the lower house of Parliament, Vyacheslav Volodin. 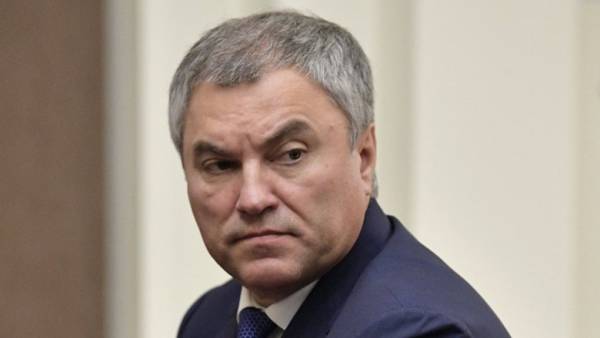 Volodin on Friday held the first meeting of the working group of the state Duma on perfection of the pension legislation, where MPs together with representatives of government, business and expert circles are discussing the revision of the government bill on the pension system.

“We agreed to meet on 12 September in order to explore, perhaps by this time will receive an offer from the President has legislative initiative, — the amendments and amendments that continue to enroll in the State Duma”, — said Volodin.

On Wednesday, Russian President Vladimir Putin delivered a half-hour address to the Russians, which stated that the main objective of the pension changes — the stability and sustainability of the pension system. According to him, to postpone change any longer, it’s irresponsible, and hesitation in this matter may endanger the stability and security of the Russian Federation. The President stressed that the decision on pensions is a difficult, but necessary, urged Russians to be sensitive to future innovations.

Meanwhile, Putin proposed a number of measures that will allow mitigate their decisions. In particular, according to him, the age of retirement for women in Russia must be 60 years instead of the government 63, 65 for men. Other plans include a large mother should have the right of early retirement, the terms of pensions for the indigenous peoples of the North should be retained, unemployment benefits for those approaching retirement age is increased, and for the dismissal before retirement, you need to enter administrative and even criminal liability. Proposals to change the pension system in the near future will be formalized as amendments to the bill and submitted for consideration to the state Duma, said Putin.