The US state Department today accused Russia of “harassment” of international navigation in the Kerch Strait and the Azov sea, and urged to remove these restrictions. A statement signed by the press Secretary of the Department of state Heather Nauert. 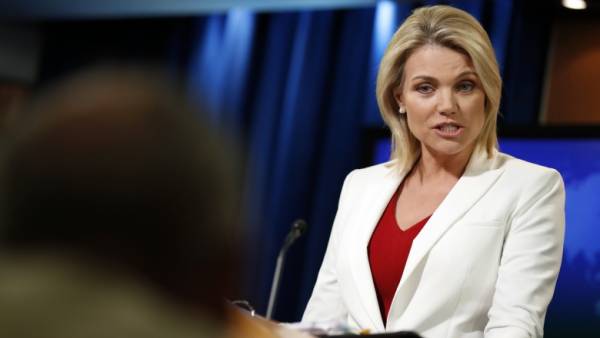 According to foreign policy Department of the USA, from April 2018 Russia detained hundreds of commercial vessels, and in recent weeks has not allowed at least 16 Ukrainian vessels to go in the Ukrainian ports of the Azov sea.

“Russia’s actions to limit sea transit are another example of its campaign to undermine and destabilize the Ukraine, as well as its disrespect of international law… We call on Russia to end restrictions of international shipping in the Azov sea and the Kerch Strait,” — said in the message.

This week, the commander of the Ukrainian Navy Igor Voronchenko said that Ukraine will soon increase the military potential on the Azov direction, including the strengthening of the naval group, marine infantry and artillery in that direction.

Prior to that, to increase its military presence of Ukraine in the Azov sea called for the Secretary of the national security Council and defence of Ukraine (NSDC) Oleksandr Turchynov. He explained this “expansion” of Russia and its attempts to “actually start a military and economic blockade of the Azov coast of Ukraine.”

The Ministry of infrastructure of Ukraine was estimated only direct losses of the state from the construction by Russia of the Crimean Kerch Strait bridge to 500 million hryvnia ($19.1 million) per year. Evaluation the port authorities of Mariupol, in 2017 the city’s port lost “30% of the traditional fleet” due to the construction by Russia of the Crimean bridge and height restrictions of the flight (35 m). Port of Mariupol (turnover — 15 mln t) reported that the bridge stops servicing large vessels with lifting capacity of 25 000-30 000 t.

Under the agreement on cooperation in using the Azov sea and the Kerch Strait between Russia and Ukraine, they are recognized as internal waters.