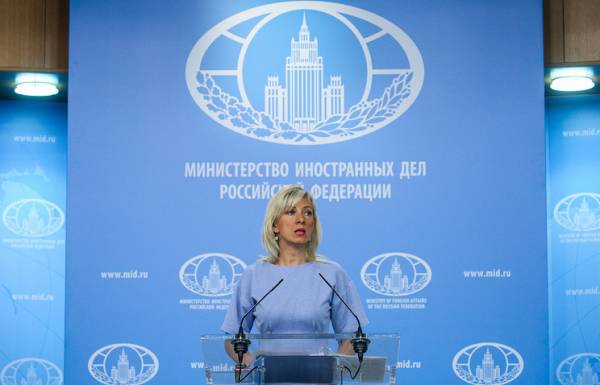 MOSCOW, August 30. /TASS/. Barrels of chlorine delivered to the city of g’s es-Shughour in Idlib province for a mock attack with chemical weapons allegedly by the Syrian government troops. This was at the briefing on Thursday was declared by the official representative of Russian foreign Ministry Maria Zakharova.

“According to reports, 23 and 24 August in the district Iglinskiy areas of de-escalation, namely in the village of g’s es-Shughour delivered eight barrels of chlorine and ammunition to the jet system of volley fire, which will equip it with chlorine. There also arrived, guess who, the so-called “White helmets” – said the diplomat.

According to Zakharova, the representatives of the organization arrived in the city with the equipment for video recording of mock the use of chemical weapons.

“That is another provocation, is preparing at full speed”, – concluded the representative of the foreign Ministry.

The consequences of the aggression

The consequences of a possible aggression of the West against Syria is unpredictable, it will cause a severe blow not only for settlement but also for global security, said Zakharov.

“We are experiencing the most serious concerns and share them with the world community, with the media in the prospect of implementing this scenario (provocation with chemical weapons in Syria and possible impact of the West on the Republic – approx. TASS). It would be a severe blow not only on resolving Syria, but also for global security. The effects of games with the fire unpredictable. Not every person just might be able to get away with this,” warned the diplomat.