MOSCOW, 29 Sep — RIA Novosti. Decisions on changes in the pension system, announced by the President, was “endured” by him and the government, said Deputy Prime Minister Tatiana Golikova is in the air “First channel”. 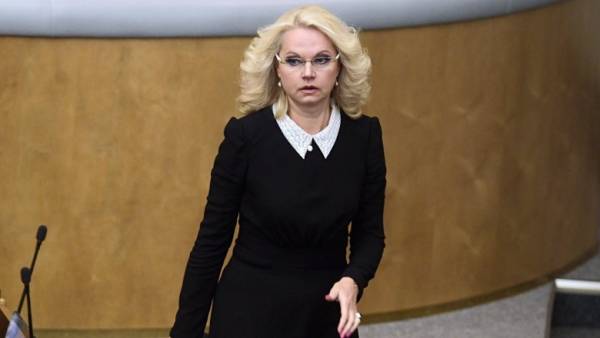 “The President took into account those public discussions, which were held at different venues in the preparation of the bill a second reading and, in fact, decisions made today, they were, so to speak, pained by the President and all of us helpers who helped including to formulate and to calculate different measures,” — said Golikova.

Vice Prime Minister also noted that such a decision is sensitive to her as well.

“Of course, for my family and for my family, and my friends is the solution, it is not even important. Perhaps it should be called momentous because it… well, people have built some plans, thought it would be, and now it needs to be changed, and of course, here, it is probably hard to come up with some right words to explain that need it,” Golikova said, noting that the President in the first part of his speech explained the necessity of such a step.

We are a country that is responsible not only for the development of the pension system and ensure higher pensions for our citizens, but we are also responsible for the entire economy and the entire social sphere of the country…

“Today, and it was very clearly stated by the President that further the preservation of the situation, namely the growing dependence of the budget of the Pension Fund from the Federal budget will lead to the fact that we will reduce other budget expenditures, and I think that no matter how difficult to accept, but it is very important to understand. Because the decisions announced today, they will definitely aim big on two things: the welfare and independence of our country and the welfare of our citizens”, — concluded the speaker.

On Wednesday Putin spoke with a half-hour appeal to the Russians, in the course of which he stated that the main objective of the pension changes — the stability and sustainability of the pension system. According to him, to postpone change any longer, it’s irresponsible, and hesitation in this matter may endanger the stability and security of the Russian Federation. The President stressed that the decision on pensions is a difficult, but necessary, urged Russians to be sensitive to future innovations.

Meanwhile, Putin proposed a number of measures that will allow mitigate their decisions. In particular, according to him, the age of retirement for women in Russia must be 60 years instead of the government 63, 65 for men. Other plans include a large mother should have the right of early retirement, the terms of pensions for the indigenous peoples of the North should be retained, unemployment benefits for those approaching retirement age is increased, and for the dismissal before retirement, you need to enter administrative and even criminal liability. Proposals to change the pension system in the near future will be formalized as amendments to the bill and submitted for consideration to the state Duma, said Putin.