Until the end of July 2019. the regions can go to reference the principle of formation of tariffs for housing and communal services and network complex, long-term rates for 5-10 years and be denied the opportunity to raise tariffs for the population above the specified level without the consent of the FAS. 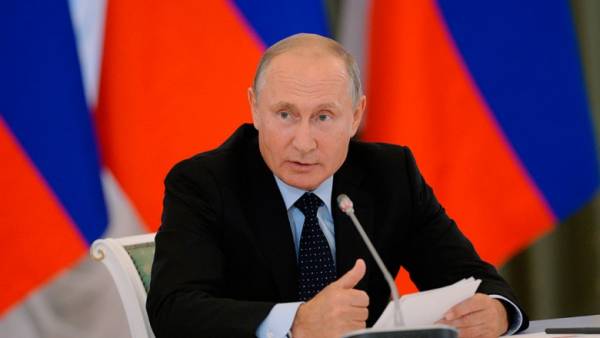 Appropriate instructions of President Vladimir Putin are contained in the draft Protocol on the results of the meeting of the presidential Commission on fuel and energy on August 27, according to RBC with reference to the document.

With the proposal for the reference tariff was made by the head of Antimonopoly service Igor Artemyev. Putin instructed the government to implement this proposal until July 31, 2019, confirmed the publication of one of the participants.

“Today, in some regions there was a practice of pushing unreasonable growth of tariffs. In the end, the proceeds do not go to the development of regional energy and, consequently, into the pocket of specific individuals close to those who make decisions of this kind. There is a proposal to change this situation by introducing a reference to the principle of formation of tariffs”, — said Putin at a fee.

We are talking about the reference costs for the modernization of facilities, explained to “Vedomosti” Federal official who took part in the meeting of the Commission. Standard solutions of the modernization of TPP and their standard cost was developed by the Ministry of energy and consistent with the antitrust authorities, said to “Vedomosti” Deputy head of FAS Vitaly Korolev: “These model projects will be submitted for the competition, generation companies based on them will be able to form their proposals on the capacity price. It also is determined by competition and is not regulated by the state.”

The mechanism will allow to establish the fair value of the modernization projects that the generating company did not offer expensive and unusual solutions, says Korolyov: “It will make suggestions of generators understandable and comparable. For consumers, this means transparent pricing for power”.

Now tariffs for each heat supplier and the network organization annually sets the authorities of the regions and in this system, there is a space for overstating or understating the costs of power depending on, “how to negotiate” with the local authorities indicated RBC of the participants in the discussion.