CEC is ready for a possible referendum on pension changes

MOSCOW, 29 Sep — RIA Novosti. CEC ready to hold a referendum on changes to pension legislation, if it takes place, to date the office has received 101 applications for the issue, said the head of the Central election Commission, Ella Pamfilova. 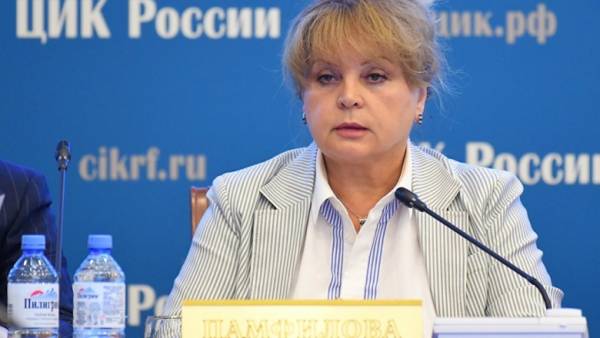 “We have prepared seriously for the referendum, if it happens,” — said Pamfilova at the meeting of the CEC.

According to her, the purpose of the referendum is really possible in February 2019.

“The day of the vote (on the referendum) can be Sunday from 7 April to 12 may 2019… We are ready in all aspects, including the financial aspect — what it means, what to do, any amendments to the budget to make”, — said the CEC head.

According to her, the office has received notification 101 from 67 regions of the Russian Federation with the petition for registration of the regional group.

“From the specified 101 motions — 34 — this question, which was formulated by the Communist party”, — said the head of the Central election Commission.

“Because that would actually be a situation where they could no longer endorse the state pension system, which has been in the legislature for the period of a referendum. That was incorrect,” — said Pamfilova.

The Chairman of the CEC noted that different initiators of the referendum on the pension question can join forces and in 43 regions to recruit the necessary number of groups for the referendum.

“There’s still a chance, if you want to hold a referendum, that is, five issues, which we approved,” he assured Pamfilova.

The Central election Commission of the Russian Federation has previously acknowledged the relevant law, the wording of questions for a nationwide referendum on changes of the pension legislation of the three action teams. One of these initiatives belong to the Communist party, the second — the head of the capital municipal district Taganskaya Ilya Sviridov, who is running for the current election of the mayor of Moscow from “just Russia”, the third — representatives of the all-Russian Union of public organizations that work with large families. On Friday, the office reviewed the compliance with the law two more similar language proposed to the other two action teams, one of them — in the Vologda region, the second — in Nizhny Novgorod. Both questions were also recognized.

The state Duma on July 19 adopted in first reading a government bill on changes in pension legislation, he suggests raising the age of retirement to 65 years for men and 63 years for women. The change is expected to make phased from 2019. The house approved the basic provisions of the document, from now until September 24, it will collect amendments, which will then be a vote in the second and third readings and consideration in the Federation Council.