Set the number attacked a troop train in Transbaikalia

EN route to the teachings of the military echelon in Transbaikalia stoned about 10 people. On Tuesday, August 28, in the Main military investigation Department of the Investigative Committee of Russia (TFR) has told RIA Novosti. 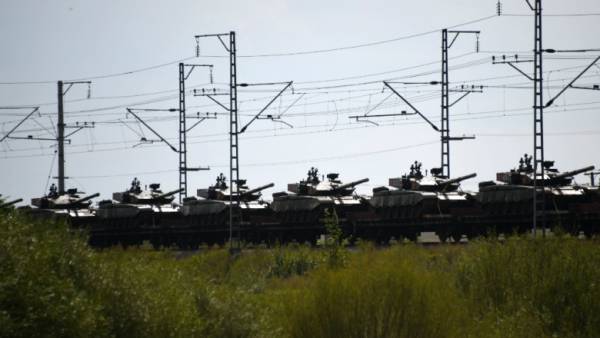 “About one o’clock in the morning, about 10 people approached the military echelon and began to throw stones at the sentries,” — said in the message Department. At the same time, a source in emergency services of the region told TASS that the echelon of the Central military district (CVO) followed the teachings of “Vostok-2018”.

“It was the train CVO, which has deployed military exercises “Vostok-2018″ on the range near Chita. Investigation of all the circumstances that have led to state of emergency in Zabaykalsky Krai”, — he said.

Earlier on August 28, it was reported that the attackers on a military train at the railway station of Petrovsky Zavod in Transbaikalia was associated with the underworld. Time shot one of the attackers, nicknamed “Edincik” born in 1989, who was “looking” — the coordinator of the criminal groups.

He, along with friends celebrated his birthday in a cafe near the station. “The company had a conflict with the military who went to the store, then a local tried to break into the echelon, which all opened fire,” — said a source in uniform dezhurno-dispatching service (EDDS) Petrovsk-Zabaykalsky district. According to him, killed the birthday boy, and another man was wounded.

Representatives of the Eastern military district reported that the use of weapons by sentries on post in accordance with the provisions of the Charter of garrison and guard services of the Armed forces of the Russian Federation.