Transparency international counted how many MPs promoting the interests of intelligence and law enforcement. 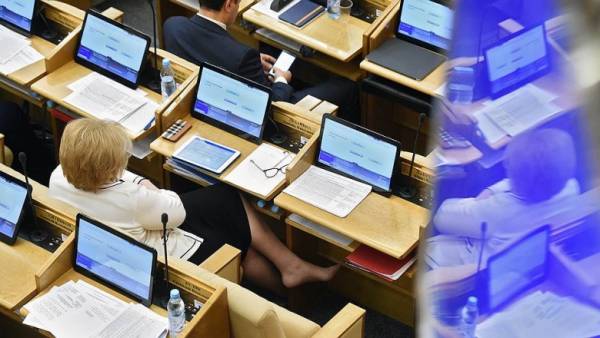 The center of anticorruption investigations and initiatives “transparency international” (TI) analyzed the activities and biographies of all deputies of the state Duma and came to the conclusion that every fifth parliamentarian belongs to the security lobby. In practice, this means promoting the interests of the FSB, MVD, Prosecutor’s office, Investigative Committee, Regardie, the defense Ministry and others. The cost of the power budget of the country since 2012, began to rise sharply. The deputies of his involvement in the lobby deny.

To calculate lobbyists in TI has identified two criteria: their law-making activities and professional relationships with the security forces before the election.

According to the organization, in the current convocation of the state Duma of the 86 deputies (19% of the total) belong to the security lobby.

26 deputies, according to TI belong to the lobby of the Ministry of defense, and 20 to the FSB, 7 — MIA 8 — to office of public Prosecutor and SK. Such agencies as Regardie, FSO, the SVR, the FPS and MCHS, private lobbyists do not have, but their interests together with the interests of other security forces is also promoting the power of the lobby. “The practice of lobbying range from formal written complaints, participation in consultation and workshops, organizing public campaigns to informal meetings of lobbyists with government officials and various forms of funding”, — stated in the investigation of TI.

Profile Committee of the state Duma security and anti-corruption is headed by Vasily Piskarev, who before being elected to the Duma from 2012 to 2016, he held the position of first Deputy Chairman of the Investigative Committee. Mister Piskarev is also the co-Chairman of the Commission on consideration of Federal budget expenditures aimed at ensuring national defense, national security and law enforcement. The first Deputy Chairman of the security Committee is Ernest Valeev, the former Deputy attorney General. Another Deputy Chairman of the Committee Anatoly Vyborny, who served until 2003 the Main military Prosecutor’s office. The sub-group of lobbyists, prosecutors, and SK is numerically less than the defense Ministry, but formally has a great influence in the Duma profile Committee and the group of power lobby in General, I believe in TI.