Posted a farewell message to McCain

Former Advisor and friend of Senator John McCain Rick Davis presented a farewell address to the American policy to the people. The full text of the message leads to NBC News. 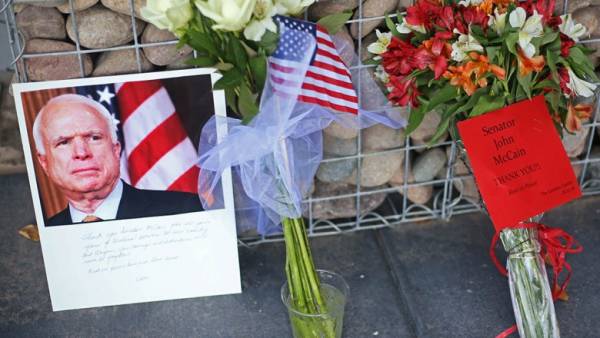 “We are losing our greatness, when confuse patriotism with the primitive rivalry that it sows resentment, hatred and violence in all corners of the globe. We weaken it when we hide behind walls instead of tearing them when doubt the power of our ideals and do not trust them to be a great force for change, which they always had,” the letter reads.

The Senator urged Americans not to despair because of the difficulties faced by the country, and believe in the great future of the United States. McCain said in the letter that he is sorry about mistakes, but hopes that his love of country outweigh them.

The politician added that he would not exchange one day of your life on the best day of someone else’s life. “The Americans never leave. We never surrender, we never hide from history. We create the history. Goodbye, Americans, God bless you, and God bless America”, — stated in the message.

On the death of Senator McCain became known on the night of August 26. He died on 82-m to year of life. Two days before suffering from brain cancer, the Senator refused to continue treatment. The family McCain asked the President of Donald trump not to attend the funeral, and to confine farewell speech. The same wishes were expressed by former American leaders — Barack Obama and George Bush.