Who dares to go to Red square

Swift, at the level of the grasping reflex, the detention of three persons, released on 25 August, 2018 on the Red square in honor of the 50th anniversary of the protest against the Soviet invasion of Czechoslovakia, captures the transformation of the red square is a sacred place, where the authorities allow only activity organized from the top. Manifestation of independent civic positions and 50 years later is regarded as a gross violation. 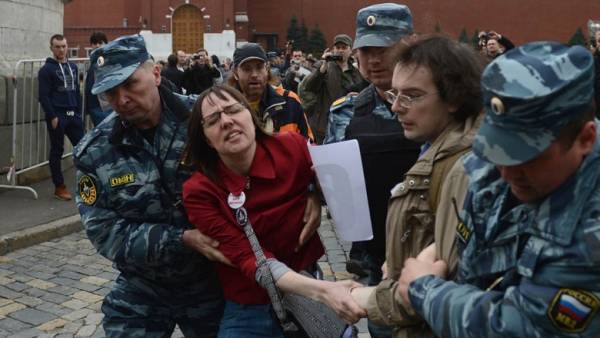 On Saturday on red square the police detained Sergei Sharov-Delaunay, a cousin of Vadim Delaunay, one of the demonstrators of the eight dissidents on 25 August 1968, and politician Leonid Gozman with a poster from 50 years ago “For our and your freedom”. Soon, the police arrested near the place of execution Anna Krasovitsky granddaughter of the late Natalya Gorbanevskaya participated in a demonstration on 25 August 1968, went to Red square to support starving more than 100 days Director Oleg Sentsov.

It is possible to speculate about the relevance of the famous slogan of the dissidents, continuity of generations and the softening of manners (the detainees were soon released from the police with the obligation to appear in court for the trial of administrative cases on violation of order of holding rallies), but it probably is not the case, and status locations for demonstrations.

Since November, 1927, when in a demonstration in honor of the 10th anniversary of the revolution wedged a large group of Trotskyists, may 1990, when on may day demonstration left column of the alternative trade unions and anarchists from the anti-Soviet and anti-Communist slogans, the Red square was a place of military parades and demonstrations of the loyalty of the masses of the party and the government. In the last months of the Soviet Union and the first post-Soviet years the situation has changed: the protesters walked around the Kremlin, staged sit-ins, rally near the Mausoleum, smashed in front of the Kremlin campgrounds with a variety of slogans.

Now the power returns again carefully the red square the status of the sacred site, designed exclusively for public celebrations and the “right” of expression like a concert in honor of the annexation of Crimea. In December 2013, after the scandal due to the installation of a stylized suitcase Louis Vuitton as told then Manager of President Vladimir Kozhin, Vladimir Putin has issued a decree about the obligatory coordination of actions on the red square with the presidential administration. As far as this order conforms to the 31st article of the Constitution on freedom of Assembly — the question is rather rhetorical.