Moscow. August 27. INTERFAX.RU — on Monday, begin to act the restrictive measures of the USA against Russia in connection with the March events in British Salisbury. 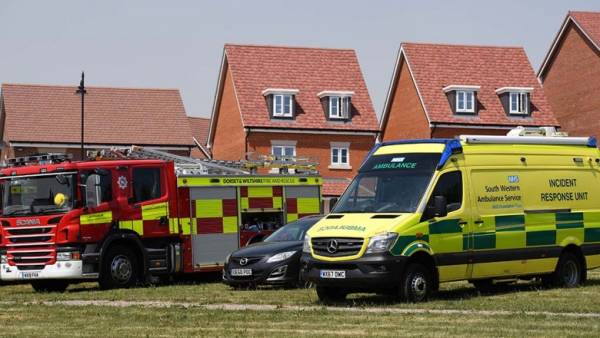 The document of the U.S. state Department on new sanctions against Russia published in the Federal register of the United States in the end of last week. Enters into force on 27 August.

This is the first package of sanctions associated with the “business Skrypalia”.

This package of sanctions, according to the document, will include a ban on foreign aid Russia on the sale of arms and financing of such transactions, the refusal of credit from the US government institutions and a ban on the export of goods and dual-use technologies.

In particular, the new sanctions package provides for the termination of assistance to Russia within the framework of the law “On foreign aid” from 1961, except for humanitarian aid, food supplies and agricultural products.

According to the document of the state Department, the sanctions on August 27, in accordance with the Law on export control of armament, require the termination of financing transactions for the sale of Russian weapons.

Also as part of a new sanctions package, the United States stopped lending and financial assistance from the government agencies of the USA: refusal of granting of Russia of any loans, loan guarantees, and the provision of financial assistance by any Department, state Agency or other U.S. government agencies, including the Export-import Bank of the United States.

In addition, the restrictive measures include the cessation of sales to Russia in the framework of the Law on export control of weapons any defensive goods, defense services, design and construction services, and licenses on exports to Russia of any goods of the List of weapons of the United States.

The U.S. Department of state has determined is necessary in the national security interests of the United States to abolish the use of these sanctions in relation to the issuance of licenses in support of the government’s cooperation in space and commercial space launches, providing such license, in each case in accordance with the policy of export licensing for Russia before the entry into force of these sanctions.

In addition, the sanctions will affect the export to Russia of goods and technologies sensitive from the point of view of national security, defined in the checklist.

The U.S. state Department in early August announced the intention to impose two sanctions: one at the end of August and the second in November.

The American media after the announcement of the state Department on the sanctions in early August, wrote that the first round of restrictive measures can have a very significant effect, as it largely duplicates the work of other restrictions that are already in place, for example, on arms sales to Russia.

Three months after the first block of sanctions may follow the second, more substantial block, which is expected to be “more painful”.

It can be implemented if Russia does not provide assurance that it will not use chemical weapons in the future and will not agree to a “local check” from the UN.

A second package of sanctions could include a significant decline in diplomatic relations and the suspension of the possibility of flights to the United States for state airline Aeroflot, and almost complete restriction of exports and imports.

The answer is adequate, but not mirrored

Russian President Vladimir Putin, meanwhile, said that US sanctions against Moscow are pointless and counterproductive, and expressed the hope that Washington is aware of the futility of such a policy.

“As for sanctions, this action is counterproductive and meaningless, especially against a country like Russia. It is not only the position of President of the United States, it’s in the position of the so-called establishment, the ruling class in the broadest sense of the word. I hope that the realization that this policy has no prospects, after all someday this realization will come to our American partners, and we will start working in a normal regime”, — said V. Putin on 22 August at a press conference after talks with his Finnish counterpart in Sochi.

The official representative of Russian foreign Ministry Maria Zakharova before the publication of the sanctions document declared that Moscow will give an adequate response in the case of the introduction of the United States of new sanctions.

“Speaking hypothetically regarding the introduction of new sanctions, yet another, updated, adjusted and so on, as you know, unfortunately, we give an adequate answer,” — said Zakharov to journalists at the briefing.

“We can’t compete with the US in the economic sphere, since they are in different weight categories. We intentionally leave ambiguity in the question of how we will respond because if we advance something to announce, it will mean the weakening of our positions,” Ryabkov said in an interview with “international Affairs”, noting that “all options are on the table”.

Former GRU officer Sergey Skripal and his daughter Julia was discovered in a serious condition in the British city of Salisbury in early March.

12 March, Prime Minister Theresa may told Parliament that they were poisoned nervously-paralytic substance of a series of “Beginner” (A-234), developed in Russia.

Moscow rejected the accusations, Recalling that all chemical weapons destroyed Russia in 2017 under the supervision of the Organisation for the prohibition of chemical weapons.