Syria are on high alert

On Monday it became known that the Mediterranean became an American destroyer armed with Tomahawk missiles. Thus, the group of carriers of cruise missiles reached a strength sufficient to saturate Syria. The Russian military say that the Western coalition is preparing for a military operation against Syrian government forces, and that it will start after it carried out a dramatization of the use of chemical weapons against civilians in Idlib province. In response to US actions, Russia also reinforces its fleet in the Mediterranean sea. 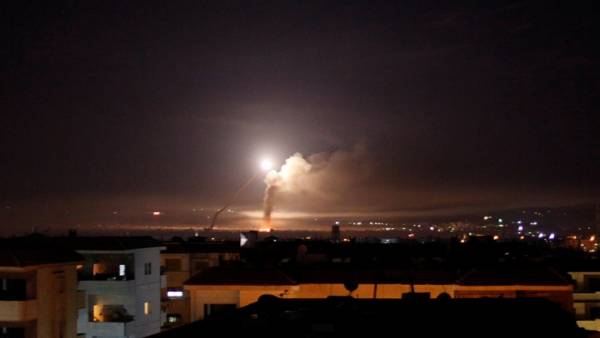 American destroyer USS Ross, with 28 cruise missiles Tomahawk, whose range allows you to strike throughout Syria, entered August 25 in the Mediterranean sea. This was reported by the official representative of the defense Ministry Igor Konashenkov, adding that the Persian Gulf is the USS Sullivans with 56 similar missiles, and the El Udeid military base in Qatar was deployed strategic bomber b-1 At United States air force, on Board of which there are 24 cruise missiles JASSM.

“These are further proof of US intentions to use the staging of the militants, “Hayat Tahrir al-sham” (the new name of the banned terrorist group “Dzhebhat EN-Nusra”) for a missile strike on Syria,” — said the General. According to him, British intelligence is preparing a dramatization of the use of chemical weapons by Pro-government forces against civilians in Idlib province. He claims that the militants had prepared eight containers of chlorine, which was taken to the village Hallus a few kilometers from the town of Jisr al-Shuhur.

According to him, this district came to a special group of trained Islamists trained in handling toxic substances under the supervision of the British private military company Olive Group.

They allegedly assigned the task to simulate the rescue of the victims of chemical weapons, under the guise of the organization “White helmets”, which Russia has repeatedly been accused of falsifying information.

Concerns of the Ministry of defence that provocation can become a pretext for a new attack on the United States, Britain and France on government and economic targets in Syria, not groundless: that’s the kind of scenario events developed in April of 2018, after reports of chemical attack in Eastern ghouta that led to a massive missile attack of Syria by coalition forces.

According to a source “” in military control bodies, information about the impending attack was confirmed by several intelligence channels.

Some measures have been taken at the end of the previous attacks of the coalition, says the source “b” on the base Hamim in addition to the previously introduced the air defense systems was deployed a battery of anti-aircraft missile system “tor-M2”. And 25 August in the Mediterranean was sent to the black sea fleet frigate “Admiral Grigorovich” and “Admiral Essen”: both armed with cruise missiles “Caliber-NK”, able to hit, including and surface ships. In addition, according to the Syrian media, Damascus has prepared its air defenses (s-200, s-125 and “OCA”) to repel a possible attack.

At the same time, a British military company Olive Group, as well as “White helmets”, has denied allegations of Russian military. And the head of the “helmets” Raed Saleh urged the international community to protect populations from Idlib possible use of chemical weapons “the Syrian regime”. “These are very dangerous statements and are reminiscent of scenarios that were previously” — he said “Kommersant”.

White helmets are sure that Russia and the regime is preparing an operation in Idlib, and they need an excuse to strike.

Such opinion is shared by other representatives of the Syrian opposition. The commander of one of the associations of the armed opposition “Tahrir al-Watan” Colonel Fateh Hassoun called in an interview with “Kommersant” the words of the Russian military of the impending provocations in Idlib “manipulation of public opinion, to find a pretext to legitimize military actions.”

Although the involvement of the Syrian authorities to himatake in East Huta in the spring of this year is still not proven as the fact, in the opposition believe that it was a method of influence of the authorities on the local group. Although France, great Britain and France attacked Syria because of the reports of the chemical attack, it did not lead to significant damage to Damascus. At the same time, the Syrian authorities were able to take East ghouta under control, and in other parts of Syria, the opposition has become more accommodating.

Anyway, as this spring, both sides accuse each other in preparing provocations. Last week, France, Britain and the United States warned Damascus that it would respond to any use of chemical weapons. This was discussed, in particular, the statement of the official representative of the USA at the UN. Separately on this subject stopped, and Advisor to the President for national security John Bolton. “We see the Syrian regime plans to resume offensive military operations in Idlib. Of course, we are concerned that Assad’s troops may again use chemical weapons… If the Syrian regime used chemical weapons, we will respond in the strongest way,” he said.

Idlib is a point of no return. If Damascus will return the area under his control, outside his power will remain only areas on the East Bank of the Euphrates, which hold the Power of a democratic Syria with US support.

“The United States, Britain and France can’t change the fact that Assad regained control of most of the territory of Syria, but they don’t want to accept the fact that he will remain in power. They have no political leverage on the situation, but they can discredit the Syrian regime. The accusation of use of chemical weapons is an infallible tool”, — said “Kommersant” the editor of the Russian edition of Al-Monitor (USA) Maxim Suchkov.