In Moldova, the protesters demanded the resignation of the government

CHISINAU, Aug 26 — RIA Novosti. The protesters in the center of Chisinau adopted a resolution demanding the resignation of Prime Minister Pavel Filip, the cancellation of the law on tax Amnesty and the cessation of political persecution of the opposition, the correspondent of RIA Novosti. 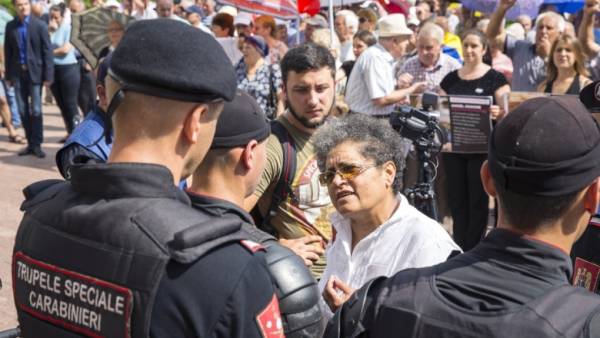 The right-wing rally organized by the party “Platform “the Dignity and truth” (PDA), the party of “Action and solidarity” and the liberal democratic party of Moldova. The leader of the PDA Andrei Nastase called on supporters to come to the protest with a demand to recognize the results of elections of the mayor of Chisinau to cancel the mixed electoral system and to dismiss judges who did not recognize the voting results. The protesters intend to set up tents to sleep in them, and on August 27 to meet on the square in independence Day.

The government should resign, it’s time to demand his resignation. But before that, let everything go back to normal — let voids all anti-people laws. Andrew Nextslide PDA

He added that the protesters are ready to come to the Parliament building during the first meeting of the autumn session (3 Sep. — Approx. ed.) and repeat their demands.

What part of resolution

In a resolution adopted unanimously, the organizers of the protest included the following demands: the resignation of Philip, the recognition of elections of the mayor of Chisinau, cancellation of the law on tax Amnesty, the cessation of political recognition of the opposition, the continuation of the investigation into the theft of a billion and bringing to justice all the perpetrators and so on.

According to the latest police, Nastase came to support the more than 6.5 thousand people. The organizers have stated that they intend to collect about 30 thousand people.

Early mayoral elections in the capital of Moldova took place in two stages, the second round was held on 3 June. According to the CEC, the winner was the candidate from the party “Platform “the Dignity and truth” Nastase, who collected collected 52,57% of the vote. The Supreme court of justice of 25 June finally declared the elections invalid due to campaign on election day, the Central election Commission on 29 June annulled the results of voting. In response, the opposition formed a “Committee of national resistance” and vowed to hold protests until until its demands are met.

The internal political situation in Moldova has led to the fact that the European Parliament has decided to suspend all scheduled payments under the macro-financial assistance to the country.