Parrots could make a cost-effective solution

German ornithologists have found that parrots are able to give up an immediate reward in the case, if instead they can choose something that will produce far greater rewards. 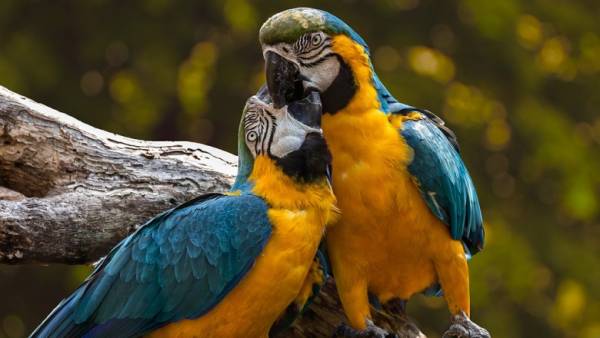 In the experiment described in the article in the journal Scientific Reports, the birds were asked to make a choice between food and object that “buy” the treats more. Scientists have found that all study participants maximize their profits by choosing a more valuable item.

Effective decision-making implies the maximization of profits while minimizing costs. The discrepancy arises in the solution of the classical problem of delayed reward: the immediate reward is usually much inferior to that which can be obtained after a short while. In this case, to maximize profits you have to maximize and costs: that is, to opt out of receiving an immediate reward in favor of more, which, however, have to wait.

Despite the fact that such decision making is cognitive rather difficult (at least from the point of view of the need of inhibition of impulses obtain the immediate satisfaction), it can not only people.

For example, Capucine monkeys refuse from being eaten treats, if you know that after some time it will be possible to exchange for far greater rewards.

To test this ability in birds decided scientists from the Institute of ornithology of the max Planck Society with the participation of Anastasia Krasheninnikova (Anastasia Krasheninnikova). In their study, they tested the mantis soldier’s macaw (Ara ambiguus), paraba Barba Azul (Ara glaucogularis), mountain macaw (Primolius couloni) and Jaco, also known as the grey parrot (Psittacus erithacus).

Parrot swore at saving his fire

Birds trained to exchange small items (e.g., roll of Scotch tape) on the food, and every item had its own value: for example, in exchange for one subject it was possible to get a piece of dried corn (small reward), the other is allowed to obtain sunflower seed (medium reward), and the third “bought” a piece of walnut (a great reward).

During the main experiment, each bird was offered a choice between an item that can be exchanged for treats a certain value, and an immediate treat. Scientists have found that in the case that the choice in favor of the subject will allow to treat more immediate, all birds choose a subject, then exchanging it for a reward.

The choice in favor of more cost-effective solutions parrots did regardless, was the immediate reward of a small or medium.

It is curious, however, that in the control condition (in cases when the bird was asked to make a choice between food and the object on which you can “buy” exactly the same meal), some birds (especially Jaco’s) always chose the subject matter and not the food. Scientists have suggested that for them the object itself may initially be greater in value than the meal, regardless of what the price was determined when training.

The authors thus showed that the representatives of the parrot family are able to effectively evaluate the profit and costs of adopting two different solutions and select the most helpful — even if it does not get an immediate reward. However, the researchers also noted that further studies on the problem of the deferred consideration involving animals should take into account the fact that birds can overstate or understate the value of an object.

Last winter, scientists have found that the predisposition to receive an immediate reward from the people largely responsible single-nucleotide polymorphism in the intron of the gene GPM6B. Also, this marker correlates with risk of clinical depression, attention deficit disorder and hyperactivity, obesity and nicotine addiction.