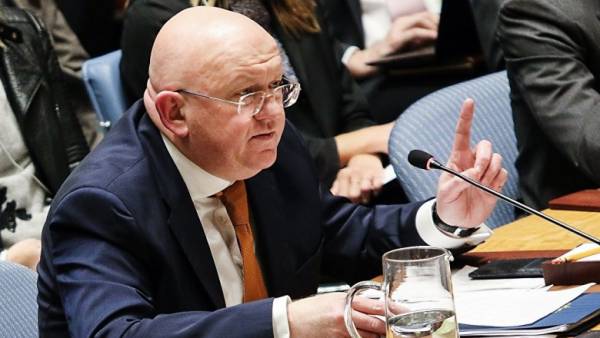 “Continue to accumulate evidence of implementation of supply of weapons (IG* — ed.) from the outside, including through semi-structure or even under the auspices of the intelligence services of individual countries,” — said Nebenzia.

The diplomat expressed hope that this issue will be discussed at the international conference of combating illegal arms transfers in the context of the fight against international terrorism, which will be held in Moscow on September 3-4.

Warned by the head of the Russian diplomatic mission, “it is possible that the frequency of terrorist attacks will increase, primarily on Eliska direction.”

Igilovtsy go to all lengths to actively involve the Commission of terrorist acts by minors, including children under 12.Basil Nebensaison representative of Russia to the UN

He recalled that “with the support of the Armed forces of Russia (in Syria — ed.), the terrorists released more than 1.4 thousand settlements, more than 96% of the territories came under the control of government troops and militias”.

“As a result, more than 1.5 million Syrian refugees were able to return home,” — said the diplomat.

Nebenzia also warned that the ISIS* in Syria, it may take another terrorist organization — al Qaeda*.

According to him, decreased activity of the IG* once again allowed to raise its head al-Qaida*, the funding of which is from 20 to 40 million dollars a month.

He noted that the group strengthens its ties with its affiliates in North Africa, trying to control local criminal business, and also invests in agricultural holdings African countries.

The civil conflict in Syria lasts since 2011. In 2014 began a military intervention of the US and its allies, which hold the region in its operation against IG* no invitation to Damascus and UN approval. Washington supports the so-called moderate opposition and in favor of regime change in Syria. Russia, in turn, at the invitation of the head of Bashar al-Assad in 2015 conducts operations HQs in close cooperation with government troops. In 2017, Moscow announced the defeat of ISIS* and the beginning of the withdrawal of its units from the territory of Syria.