Moscow. August 24. INTERFAX.RU — IN the Moscow Patriarchate regarded the words of the President of Ukraine about the intention to end the “Russian Church” in the country as a desperate attempt of Petro Poroshenko to hold on to power. 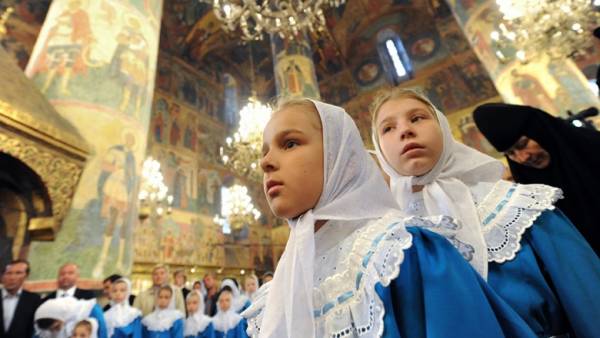 “One metropolis, and then a separate, Autocephalous Orthodox Church of all Russia, unite all the Nations, leading their lineage from the Dnieper baptismal font of St. Vladimir, already 1030 years. During this time many were replaced by secular rulers, warring, uniting with each other, sometimes bearing very different political projects; there were Empire collapsed, different ran the border was uneven relations with the neighbors… And the Church is one stood, stands and will stand. She is forever” — said to “Interfax” the Deputy head of the Synodal Department for external Church relations Archpriest Nikolai Balashov.

And strange to her to hear in a truly desperate attempt to keep the elusive power arrogant politician who does not support the tenth part of the people trying to come for her, for the Church, their new device, their new unheard of “Canon” to show her that it is natural and what is not.Archpriest Nikolai Balashovskiy of the Synodal Department for external Church relations

Petro Poroshenko said at a military parade in Kiev on the need to complete the existence in Ukraine of the Church, which, he said, “sanctify hybrid war” of Russia against Ukraine. “Let us hear today and in Constantinople, in Moscow and in the Vatican: we have the firm intention to cut the last node, which the Empire is desperately trying to tie us to itself,” — said the Ukrainian leader.

Meanwhile, the representative of the Russian Church, the words of the Ukrainian President will not find understanding among those to whom they are addressed. “Apparently, the author of the bad remarks still realize that hardly it will be understood and accepted outside of a narrow circle of personal retinue, and therefore have to appeal to Constantinople, Moscow, and for some reason even the Vatican, in the atmosphere of a military parade,” — said Archpriest Balashov.