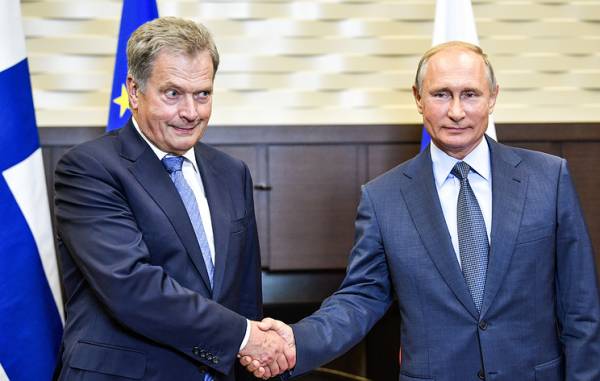 SOCHI, August 22. /TASS/. The presidents of Russia and Finland Vladimir Putin and Sauli Niinistö discussed the possibilities of further development of bilateral ties. The Russian President described the talks as “very substantive”.

At the meeting, in particular, they talked about security in Northern Europe. We also touched on the issues of settlement in Syria and in the South-East of Ukraine.

As announced at a press conference following the talks Vladimir Putin, they discussed the problems of the Arctic, first of all, given the current presidency of Finland in the Arctic Council.

The President of the Russian Federation expressed the view that the talks with Finnish counterpart “will contribute to the further development of bilateral relations”.

Putin recalled that in the second half of 2019 Finland will lead the EU. “I very much hope that during the Finnish presidency will also be able to do something positive in order to restore the normal state of relations between Russia and the EU,” the Russian leader said, answering the question TASS.

Great attention was paid to Arctic issues. “I understand that we both are ready to take part in the Arctic summit, if it happens,” – said at a press conference the President of Finland. It is Sauli Niinistö, speaking in March 2017 at the forum “Arctic – territory of dialogue” in Arkhangelsk, was proposed to host an Arctic summit.

The Finnish President is confident that the Arctic is necessary to keep free from political controversy. Still, he said, “the work of the Arctic Council was extremely productive, a good example of this is the fact that, in particular, Russia and the United States found much in common in Arctic cooperation”. Niinistö pointed out that the Chairman of the Board “focuses on the fact that this good attitude continued”.

The Russian President also confirmed that Russia is ready to participate in the Arctic summit. Answering the question TASS, Putin opined that the subject of discussion at the summit should be the rules of economic activity, safety of navigation and the conservation of Arctic flora and fauna. He stressed that many animals in the Arctic was in a difficult position in connection with the melting of the ice.

In addition, the Russian leader expressed confidence that the scientists of all countries of the Arctic region could unite their efforts in the organization of different levels of research in the field of environmental change and in conservation of natural diversity. Meanwhile, Putin said that such initiatives should be supported at the state level.

Arctic summit would address the subject of conservation ecology and use of LNG in Maritime transport in the Arctic, noted in turn Niinistö. “I have already said that if you melt the Arctic ice cap, we lose the entire planet. So the first, maybe the simplest step would be the suppression of black carbon (soot the product of incomplete combustion emitted into the atmosphere from diesel engines, coal-fired power plants and other sources burning fossil fuels – approx. TASS). Currently, some measures, for example on the territory of the Kola Peninsula, in the transition to less harmful to the environment fuel in thermal power plants”, – said the Finnish President