On the beach in Evpatoria bathed the elephants (photos, video)

Jenny and Magda lead to bathe once a week.

A couple of circus elephants released to swim in the sea on the promenade in Yalta. 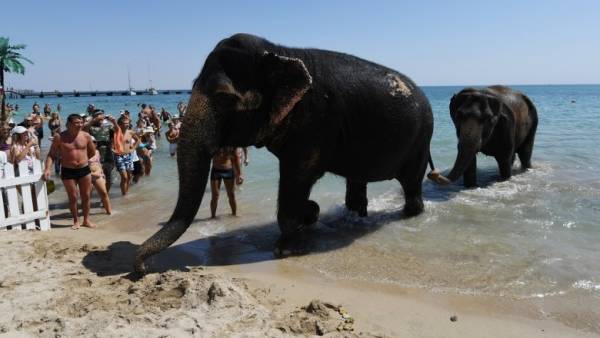 Video of animals taking a sea bath, was published by the mayor of the city Andrei Filonov on his page in the social network.

Elephants — stars of circus, which gives performances of local stadium from the end of July. Jenny and Magda lead to bathe once a week, as animals very hot, said the administrator of the circus show Vitaly Butenkov. Elephants approximately 50 to 60 years, he said.

Mayor Andrew Filonov reported that residents and tourists on elephants react differently. Some complain that the animals bathe with children. Others are glad to see the amazing creatures so close. Third protest against the exploitation of animals in the circus.

To worry about the purity of the waterfront leisure is not worth it, calm the circus workers, who do clean up after the elephants.