The Kremlin welcomed the statement of US President Donald trump’s readiness to withdraw Russian sanctions, but in Moscow nothing is known about the conditions for such a decision mentioned by the President of the United States. The journalists said the press Secretary of the President of Russia Dmitry Peskov. 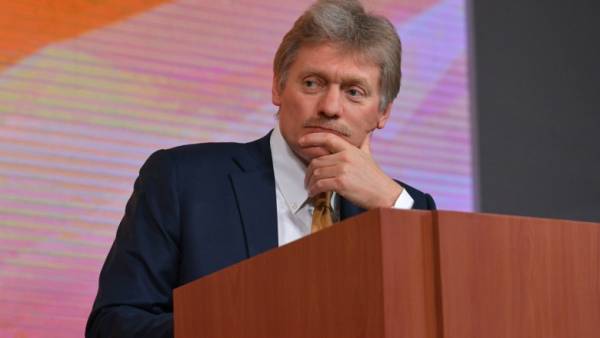 “We certainly welcome the statements that confirm the willingness to cooperate, but even more we would welcome any specific actions,” said Sands, answering questions about the statement of the trump. “Here, of course, you need to understand, on what conditions (for cooperation) going on,” — said the representative of the Kremlin.

Commenting on trump mentioned in this context, Syria and Ukraine, Peskov said that “no country in the world, like Russia, does not contribute to the political and diplomatic settlement of the situation in Syria, normalization of life and the creation of conditions for the active return of the refugees.”

As for Ukraine, then indeed there is the situation with the Ukrainian crisis pretty freeze, we see the absolute unwillingness of the Kiev authorities to do something in line with the settlement, so you need to specify what exactly is expected from Russia in terms of Ukrainian Affairs. And why nothing is expected from the Kiev authorities.Dmitry Pescovitz Secretary of the President of Russia

Earlier trump in an interview with Reuters, he admitted that it could consider lifting sanctions against Russia if Moscow did for US “something good”. Without it about any lifting of the sanctions we can not go, said the American leader. He noted that the US and Russia have many points of intersection and cooperation which would be beneficial to both parties. Among them trump called Syria and Ukraine. The US President added that Russian President Vladimir Putin never raised in conversations with him the topic of lifting sanctions against Russia.