Pensions have given a place for discussion

In the state Duma there will be a working group to discuss pension reform. 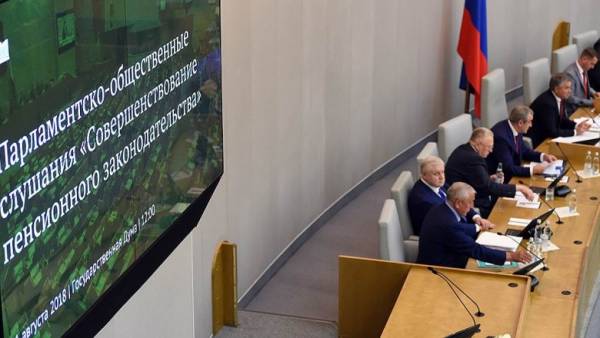 The concept of pension reform in Russia can vary in detail, but to raise the retirement age. On Tuesday during the parliamentary hearings on pension changes in the state Duma, said the head of the accounts chamber Alexey Kudrin. According to him, to Finance the deficit of the Pension Fund from the funds of oil revenues or reserves of the budget impossible. The increase in insurance premiums, according to the head of Ministry of labor Maxim Topilin, will lead to growth of shadow sector in the economy of the Russian Federation.

The concept of the pension reform will be discussed, despite the adoption of the bill on raising the retirement age in the first reading. This was announced by the head of the accounts chamber Alexey Kudrin, speaking at the parliamentary hearings on pension changes in the state Duma. “We discuss the resonant question, we found ourselves on the concept of the fork, which determines the future of our country. It would seem that today we were supposed to discuss details, as the bill adopted in the first reading, but today I will discuss conceptual issues”, said Mr. Kudrin.

He stressed the inevitability of raising the retirement age, because Russia can not use national wealth Fund and oil revenues for the balance of the pension system:

“Oil revenues, I believe, today, can not serve as the basis for the payment of pensions, although I wrote it into the law on the national welfare Fund he is including in problems of payments and the balance of the Pension Fund.”

Alexey Kudrin has reminded that in 2008-2009, half of the reserve Fund was spent to rescue the budget system, including the budget of the Pension Fund. “Reserve Fund today, no. Today we have only one national welfare Fund. It is enough for one such similar crisis,” he warned.

As for the other option of filling the pension budget, according to the head of Ministry of labor Maxim Topilin, the proposal to raise the rates of insurance contributions to the Pension Fund is the wrong solution in this case, the Russian economy may go into the informal sector. He stressed that decisions taken in the spring at fixed premiums give “the ability to balance including the budget of the FIU”.

The purpose of the pension reform, according to Mr. Kudrin, is “the growth of pensions in real terms at least a quarter, and subsequently a third.” The replacement ratio in accordance with the standards of the International labour organization (ILO) should be increased to 40% of salary, but now the average for developed countries is the level of pensions in 60-70% of earnings subject to the voluntary funded component. Alexey Kudrin has explained that he is opposed to the abolition of the mandatory funded part of pensions. “This later today when fully developed the experience would be additive up to 15% plus the replacement rate of your salary, which you will retire,” said he. We will remind, now the government is discussing the prospect of upgrading the storage component in a voluntary format.

Other parameters of the pension reform, according to the Chairman of the lower house of Parliament, Vyacheslav Volodin, will be discussed by the working group from representatives of relevant committees of the state Duma, faction members and volunteers.