Moscow. August 20. INTERFAX.RU Attacks on police in Chechnya were designed to dampen the Muslim holiday Eid al-Adha, the head of the Republic Ramzan Kadyrov. 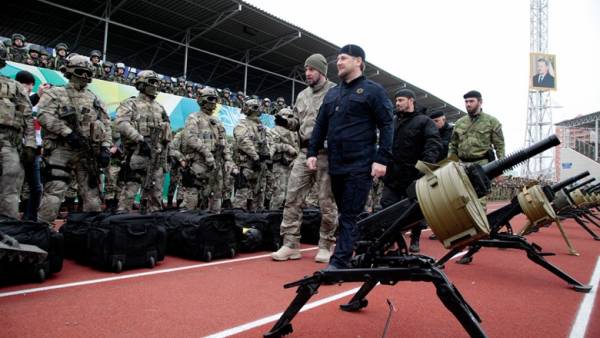 “Today a group of young people attempted to commit high-profile crimes. There is no doubt that the goal was to dampen the festive day, cause the big public resonance, to prevent the inhabitants of the Chechen Republic to carry out activities related to Eid al-Adha”, — Kadyrov wrote in social networks. “The main goal is to create the appearance of any force capable of organizing armed actions and terrorist acts,” he said.

Thanks to the vigilance of the police all these attempts foiled, the bandits neutralized, one of the attackers made up, but still alive, was taken to hospital. In the town of Shali injured two policemen, in Grozny were injured by traffic police.Ramzan Kadyrov the head of Chechnya

According to Kadyrov, “there is no doubt that the brains of young people brainwashed by various social networks there Elisavety (as Kadyrov calls of militants of the banned in Russia “Islamic state” — if). “But the big picture suggests that there is no support, no social base they have in the Republic”, — said the head of the region.

According to him, “on the absence of the “owners” of any signs of shame or conscience is evidenced by the fact that they attract adolescents with fragile psyche”.

“The situation in Grozny and Chechnya calm and stable and no signs of complication no. Law enforcement officers in the normal mode, vigilantly serve”, — said Kadyrov. He also said that he had instructed the interior Ministry for Chechnya to provide all necessary assistance to the victims and to decide their promotion.

Earlier an informed source told “Interfax” that the four militants who attacked police in Chechnya, was destroyed, and committed a suicide bombing survived. He added that the attacks injured five policemen and two civilians.

He said that two militants with knives tried to enter the territory of Department of police, wounded two officers and was destroyed by return fire. Minor injuries during the shooting received two bystanders. In the second case the militants tried at the entrance to Grozny undermine was in the car, gas cylinders, but they did not explode. Then, according to the source, militants shot down three tried to stop the police car, then the car was fired and who was in it, two militants were destroyed.