Moscow. 19 Aug. INTERFAX.RU — Upgraded heavy Mi-26T2 IN the first time rose into the air, reported the press service of the holding “Helicopters of Russia”. 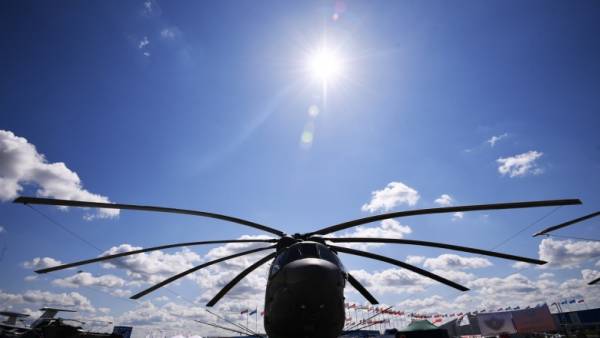 “On the flight test station of the company “Rostvertol” the holding “Russian Helicopters” (part of “rostec”) was the first flight of the modernized Mi-26T2, created for the Russian Air and space forces,” — said the press officer.

He recalled that a prototype of the Mi-26T2 will soon be on their own will go to Moscow oblast for participation in the forum “Army-2018”.

The Director of the aviation cluster “Rostec” Anatoly Serdyukov stressed that modernization significantly expands the potential application of the heavy-lifting helicopter in the world Mi-26.

In the state armaments program for the years 2018-2027 provides for the equipment of troops with heavy helicopters in this modification. Thus, I am confident that the Mi-26T2 will be in demand not only in Russia but also abroad: we see potential in the markets of Asia, Africa and the Middle East. Anatoly Surdukowski aviation cluster “Rostec”

According to General Director of “Helicopters of Russia” Andrey Bogunskogo, “the successful implementation of the first flight demonstrates that the technical solutions applied in the modernization of the Mi-26 in the interests of the defense Ministry, was faithful.”

“We were able to significantly reduce crew workload, largely automating the flight and landing of a big and complex machine, — quoted the press service his words. — In addition, significantly improved the survivability of the helicopter through the installation of a modern onboard defense system”.

As reported, the start of serial production of a modernized version of the world’s heaviest helicopter Mi-26T2 IN scheduled for 2019.

In April, the press service of the holding “Helicopters of Russia” announced that the JSC Rostvertol together with JSC “Moscow helicopter plant. Mile” completes the manufacture of the first prototype of the Mi-26T2 helicopter Upgraded V. will replace the machines, which are used by the defense Ministry.

The Mi-26T2 IN the need to provide flights to any region in particular, with a complex physical-geographical and climatic conditions, at any time of the day, equipped and unequipped roads, and routes off-piste and on bitoriented terrain, in conditions of fire and information counteraction of the enemy.