Dance with the bride, a toast in German, touching the inscription on the car, the Kuban Cossack choir and gifts in the form of the rural landscape, macovigilance and Tula samovar: the visit of the President of Russia Vladimir Putin to the wedding of the head of the Austrian Ministry of foreign Affairs Karin Kneissl made Austria a lasting impression. 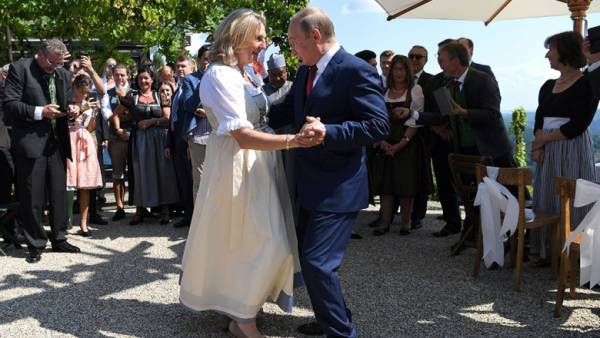 “Газета.Ru” they learned what the press wrote of Austria about this event.

The arrival of Russian President Vladimir Putin to the wedding, the foreign Minister of Austria Karin Kneissl and multimillionaire Wolfgang Meilinger last week shook the whole of Austria. The wedding ceremony took place in located in southern Styria, gamlitz the on 18 August, but a few days before and after the wedding, the Austrian media were discussing the wedding, the security measures taken in connection with Putin’s visit, gifts to the Russian President and the performance of the Kuban Cossack choir. The arrival of the Russian leader caused in the Austrian media a strong reaction — both positive and negative.

The largest Austrian newspaper Die Kronen Zeitung called Putin “the most controversial” guest, who was invited to the wedding Kneisl.

All pipe: Putin and Merkel pressed on the gas

The journalists were impressed by the security measures taken in connection with the visit of the Russian President: his motorcade was accompanied by numerous cars with flashing lights, a helicopter, and the A9 highway was blocked in both directions.

According to the police spokesman Manfred Gruber, Putin’s security was provided by “several hundred” employees of law enforcement bodies.

The number of police officers responsible for security during the event, said the daily newspaper Oberoesterreichische Nachrichten — according to her, we are talking about more than 500 law enforcement officers. Taken security measures would cost the Austrian taxpayers at least €250 thousand, expected publication before the wedding.

However, the material of the newspaper is a significant refinement as stressed by the representative of the foreign Ministry of Austria, in occasion of the visit of a foreign head of state in the country subject to certain security measures. He said that the Russian party assumes own costs and Kneisl will pay for the wedding and the services of a private security firm.

Edition repeatedly draws attention to the fact that Putin’s visit was “working”. Despite the statement by the press Secretary of Russian President Dmitry Peskov on the private nature of this trip, on a holiday on the occasion of the marriage of the head of the Austrian foreign Ministry, the publication writes as “working wedding”.

This was one of the reasons to criticize the actions of Karin Kneissl. So, the leader of the Social democratic party in the National Council of Austria Andreas Schieder said that the foreign Minister has mixed up his personal business with the official agenda of the country.

you need to know about Russian-Austrian relations

Newspaper Der Kurier believes that from the wedding Kneisl did “show Putin”. The newspaper has not missed a choir of Cossacks, which was heard on the streets of Gamlitz, no autograph Putin, left under circled in a heart with inscription “Newlyweds: Wolfgang and Karin,” presented to newlyweds on white “Bug”, nor a deep curtsy of the bride after the dance with the Russian leader.

In addition, Putin mentioned dogs Karin Kneissl when I drank a toast to the newlyweds.