General of the FSB arrested for fraud in “Energy”. 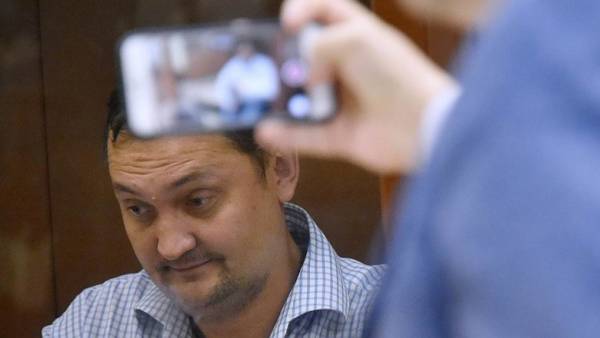 On Monday, the Babushkinsky district court on motions of the head investigative Department of the Investigative Committee of Russia (GSU SKR) sent to jail the former Deputy CEO of rocket-space Corporation (RKK) “Energy” the General-the major of FSB in resignation Alexey Beloborodov, and two of his subordinates identified under house arrest. Managers tried to 31,5 million rubles from the construction company for its participation in the tender of the Corporation.

With the petition for arrest of Alexey Beloborodov court figured out in half an hour. When the judge asked the accused Beloborodova, where he works, he softly said: “Since August 17, anywhere”. And before that, the defendant reported, he was the Deputy head of RSC Energia staff, social policy and audit activities. The Corporation Alexey Beloborodov came from the FSB in 2016, having retired in the rank of major-General security services.

“Not pleaded guilty”, said unexpectedly then a retiree. “It is necessary not now, but later,” admonished his judge. The defender of mister Beloborodov asked to adduce three certificates, which positively characterize the accused. According to them, Alexey Beloborodov was the father of many children, combatants, awarded the medal, and retired FSB.

Criminal case about attempt at especially large swindle (article 30 and part 4 of article 159 of the criminal code) in respect of Mr. Beloborodov and his subordinates — the chief specialist of Department of control and audit activities of the “Energy” Oleg Pylnev and employee of the Corporation Ilya Shenderey of GSU SKR has filed on 17 August by the office of the “P” of the economic security service of FSB. Shortly before a security officer asked one of the leaders of the construction company “Sozidanie”, reported that for the victory in the contest announced by “Energy”, it requires a 31.2 million RUB.

During the operational experiment, performed using special equipment under the control of the FSB, the Lord Pylnev and Shandera received part of this sum, and marked with the special-composition rubles. Almost half a million rubles are also marked later found in the safe of Mr. Beloborodov. All three participants of the corruption scheme, was arrested, and after the FSB was informed about this “Energy,” dismissed.

Unlike accomplices, immediately decided to cooperate with the investigation, testified on Mr. Beloborodova, he did not admit guilt, but from testimony abstained, referring to article 51 of the Constitution.

Citing the standard set of rationales for arrest, the investigator noted that you have not all the participants of the corrupt scheme, and the crime is of “exceptional character.”

Protection in response proposed to elect Mr. Beloborodov house arrest, noting that all charge is constructed on indications of the gentlemen Pylneva and Chanderia, which allegedly pressured. “They promised to send to jail,” said the lawyer. Alexey Beloborodov promised not to run away from-under house arrest, the more he didn’t have a passport. The judge sent him to two months in jail, but was placed under house arrest repentant masters Pylneva and Sendaria. “I fully admit my guilt, repent and everything you need to know the result, tell him,” he said, in particular, a former employee of Guebipk of the MIA Pylnev. The defense asked instead of house arrest on his own recognizance.