MOSCOW, 19 Jul — RIA Novosti. The coordinator “the Left Front” Sergey Udaltsov, who was arrested on August 17 for 30 days, admitted to hospital from the detention center due to poor health, reported RIA Novosti his wife Anastasia Udaltsova and Executive Secretary of the public oversight Commission (POC) of Moscow, Ivan Melnikov. 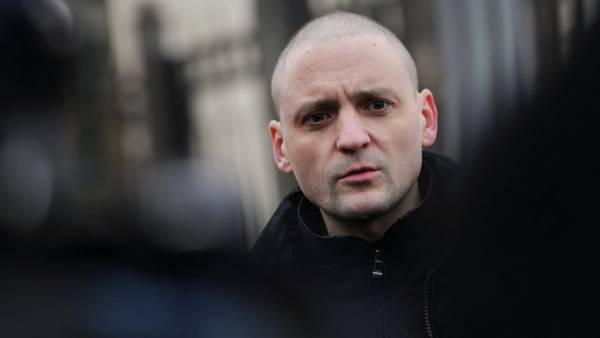 Meshchansky court in Moscow August 14, Udaltsov was arrested for 30 days for violation of the order of the meeting on July 28. After his arrest, according to Udaltsova, he stopped taking water and food. The Moscow city court on Friday 17 August upheld his administrative detention.

Udaltsov year ago released from a colony where served time in 4.5 years on charges of organizing riots on Bolotnaya square in Moscow in may 2012. After that Udaltsov has been repeatedly detained for various violations in the organization of demonstrations and actions.

“Today it came to visit the PMC. When they called an ambulance and he was hospitalized. Driven while, I don’t know which hospital. I’ll learn now, because it only took. Have no idea what the diagnosis is, but he’s dehydrated. And what the overall picture will be in the hospital to watch. Sugar is low. There is only the sugar looked and measured pressure. Today, five days will be four hours as it keeps a dry hunger strike,” Udaltsov told RIA Novosti.

She noted that Udaltsov is delivered in the 52-th city hospital with a preliminary diagnosis of “dehydration”. Sunday it came to members of the Moscow ONK of Moscow Sergey Gusev and Ivan Melnikov, in their presence it was caused “fast”.

According to Melnikov, the conditions of detention in prison Udaltsov himself not complained, said only about no radio in the cell.

“We arrived at the temporary detention to check the conditions of his detention. During the test he complained of feeling unwell, after which the members of the PMC asked the policemen to call an ambulance. The result of the medical examination, he was admitted to the civil hospital,” — said the Agency Melnikov.

The members of the PMC when you visit the detention center noticed several points, which could be an inconvenience for people, for example, with disabilities, and reported it to the administration of the prison.