GENEVA, 18 Jul — RIA Novosti. Former UN Secretary-General Kofi Annan has died on 81-m to year of life, according to the international organization for migration, UN office on Twitter. 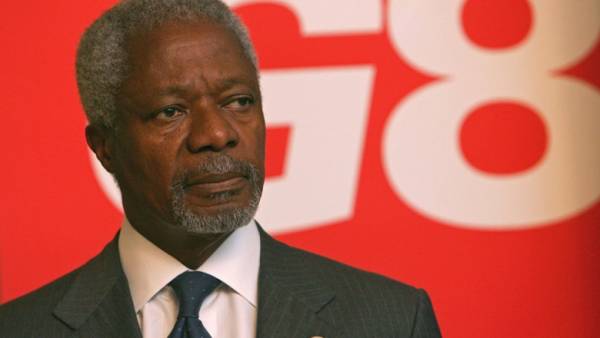 “Today we mourn the loss of a great man, leader and visionary — former UN Secretary General Kofi Annan”, — stated in the message of the organization.

In the microblog Kofi Annan has also appeared on behalf of the family and its Foundation. It says that the former Secretary died on 18 August with family after a short illness.

The family of Annan, asked not to disturb them in their period of mourning. About where to bury the former Secretary General and a place for the farewell ceremony will be announced later.

Kofi Annan born 8 April 1938 in the British colony of the Gold Coast, which later became the state of Ghana. His father was the Supreme chief of the Fanti tribe and the Governor of the province of Ashanti. Studied at home in the United States and Switzerland. While still a student, began working at the UN — first in the world health organization, and then in other structures. Headed the office of the UN high Commissioner for refugees.

From 1 January 1997, Kofi Annan became Secretary-General of the UN, and June 29, 2001, he was re-elected for a second term. In the last years of his life, Annan worked in Switzerland and headed a Foundation with headquarters in Geneva.