As musical tastes help to find a few

The online Dating service Plenty of Fish have learned how musical tastes affect relationships. The staff of the site saw more than 9 million profiles and found that fans of country, who gave their musical preferences in the profile, get 32% more posts than fans of other genres. In turn, women who wrote about the passion of heavy metal, get 9% more sentences to communicate.

The study showed that fans of country music is easier to find a mate. Perhaps the popularity of “cowboys” is that 49% of them more prone to a serious relationship.

Female rock fans also easier to find a partner — the number of mutual likes on 68% more than those who indicated in the questionnaire other data. Among the fans of this musical genre 93% looking for a long term relationship, not an affair.

According to last year survey, other site Dating — Elite Singles, 67% of service users admitted that they are important to the partner interested in the same music. With a third of respondents said that they are ready to refuse to communicate because of different musical tastes. The most popular genres were the rock (26%), country (17%) and folk (15%). 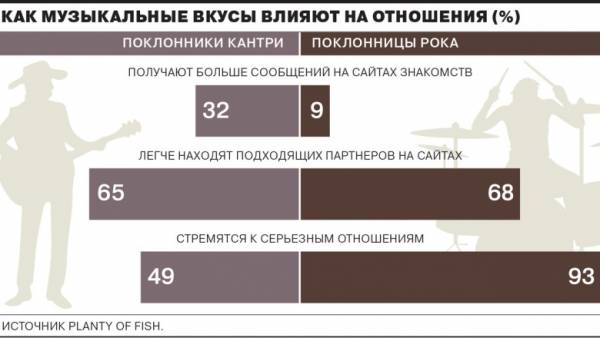