All pipe: Putin and Merkel pressed on the gas

The talks between Putin and Merkel lasted three hours. 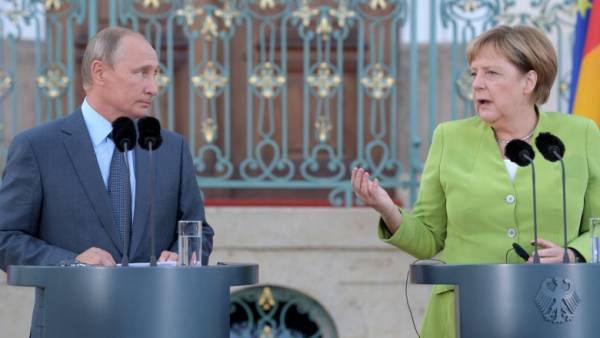 In Germany at the castle Meseberg was a three-hour meeting of the President of Russia Vladimir Putin and German Chancellor Angela Merkel. Key issues that were discussed by the leaders of the Ukraine and the “Nord stream — 2”. Putin once again called upon to consider the construction of the pipeline as an economic project and assured that the commissioning of the new “flow” does not mean that transit through Ukraine will be stopped. What else they talked about Putin and Merkel — in the material “Газеты.Ru”.

Before the talks of Russian President Vladimir Putin and German Chancellor Angela Merkel, the two leaders outlined their positions on the issues they planned to discuss, namely: Ukraine, Syria, Iran, the gas pipeline “Nord stream — 2” and interaction in terms of sanctions.

The project “Northern stream — 2” the President and the Chancellor discussed in particular with reference to the Ukrainian problem. Merkel said that even after putting the pipeline into operation, the transit of Russian gas through Ukraine should not be terminated. The head of Russia said earlier that “the flow” is a project exclusively economic, not political, but this time confirmed that it plans to stop using the Ukrainian route.

However, Putin stressed that to consider the direction of energy supplies should be exclusively in the economic sphere.

I want to mention that the main thing that the Ukrainian transit — it is traditional for us — corresponded to the economic requirements, was economic in every sense of the word.Mr Putinprime Russia

“The”Nord stream — 2″ is a purely economic project, and it does not close the possibility of continuing the transit of Russian gas through the territory of Ukraine”, — said Putin.

He also stressed that the project of the new main gas pipeline “Nord stream — 2”, on which work is carried out together with partners from Germany, will give the opportunity to improve the transportation system of Europe, to divide the supply routes and reduce transit risks, to meet the growing demand of Europe’s economy.

Currently, the “Nord Stream — 2” which will be transporting gas from Russia to Germany, is in the construction phase. The project is expected to lay two threads of a gas pipeline with a capacity of 55 billion cubic meters per year.

The resolution for its implementation have already given Germany, Finland, Sweden, but in Germany actively influence the USA with the aim not so much to abandon the construction of the pipeline, but with the requirement to start the purchase the American liquefied natural gas, which is much more expensive than the Russian.

The pressure on the project is performed by American legislators. Wednesday, August 15, the U.S. Congress introduced a bill to impose sanctions against companies that supply pipes or equipment for Russian energy companies.

The bill refers to the need to put pressure on NATO countries, through which will pass the gas pipeline “Nord stream — 2”.

At the same time, Germany is also an important element of transit of Russian energy supplies to Europe. Putin recalled that in June marked 50 years since the start of gas supplies to Germany from the USSR.