The Pentagon analyzed the “China threat”

Beijing was suspected of working out of possible strikes on U.S. bases. 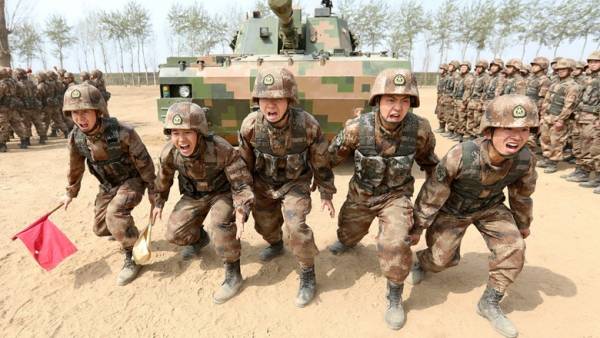 In recent years, China has significantly strengthened its military capabilities in space, but also expanded the area of operations army of the country. This is stated in the Pentagon report submitted to Congress. The U.S. military also did not rule out the fact that the Chinese work out possible attacks on US bases and allies in the Western Pacific ocean, including the island of GUAM — not accidentally, in their opinion, the number of Chinese military exercises involving bombers increased markedly.

The report that the U.S. military spent $108 thousand, begins with the reminder that “since 2002, Chinese leaders, including XI Jinping (the Chinese President.— “B”), characterized the first two decades of the XXI century as a “strategic opportunity””. “According to their estimates, the international environment in this period will contribute to the internal development of China and expansion of its “comprehensive national power”,” — noted the U.S. military. The essence of the Beijing objectives, as stated in the report, fixed in the concept of XI Jinping on the “Chinese dream of national revival”, which is designed to create a “powerful and prosperous China.”

The Pentagon noted that the Chinese authorities are trying to strengthen its economic, diplomatic and military influence. For this purpose, in particular, is developing the initiative “Belt and Road” — the offer of Association of the project “Economic belt silk road and Maritime silk road of XXI century”.

“Countries participating in the project can be consolidate economic dependence on Chinese capital that China can use to their advantage,” — warn the us military. In the example of the transaction for the transfer of the Chinese lease for 99 years of the port of Hambantota in Sri Lanka, as well as similar agreements with the authorities of Greece and Australia.

As for the military strategy of Beijing, the report noted: China has its own goals, without compromising regional stability, since otherwise, the economic development of the country would have been under the threat that the result would have affected domestic stability in China. Meanwhile, the document examines the construction, which is the Chinese contested by China, Vietnam, Philippines, Malaysia, Indonesia and Brunei reefs of the Spratly archipelago in the South China sea. Recall that two years ago the Hague arbitration admitted all of China’s claims to Islands and reefs in the South China sea illegal, but Beijing is a decision. For example, in may it became known about the location on the reefs of anti-ship cruise missiles YJ-12B, capable of hitting targets at a distance up to 295 nautical miles. Press Secretary of the foreign Ministry of China Hua Chunying said that Beijing has the sovereign right to host on its territory of any weapon I see fit. “Those who have no aggressive plans, not have to worry or be frightened,” she said at the briefing.

Another point of potential conflict as noted in the report, is the disputed areas in the Himalayas. The situation there is particularly strained in June 2017, when the Chinese military engineers started to build a road through the plateau Declam rights that challenged China and Bhutan. The government of a small Himalayan state has demanded that Beijing halt the construction, and when the Chinese did not react — called in the aid of its ally India. About 300 Indian soldiers without the use of firearms had driven the Chinese, destroyed the road and blocked the path of construction equipment. The confrontation between the two countries lasted for three months.

At the Pentagon told when to start space wars

The focus remains the problem of the DPRK. In the Pentagon report it is noted that in 2017, the relationship between Beijing and Pyongyang reached the “lowest point in decades”. “China’s priority is stability on the Korean Peninsula, which includes the prevention of the collapse of the DPRK and military conflict. As a result, in 2017 the Chinese leaders opposed the nuclear and missile activities of North Korea and was probably concerned that these actions provoke the deployment of additional forces by the United States and its allies on the Korean Peninsula. Although China has supported additional sanctions against North Korea, Chinese leaders are reluctant to take measures which they believe increase the risk of destabilizing the DPRK. This includes, for example, the reluctance to support sanctions that would have completely stopped the supply of oil to North Korea”, — explained in the document.

The United States is concerned about the development of the Chinese army. The purpose of the process outlined in 2017 at the XIX Congress of the Communist party, XI Jinping, assured: “By 2050, the people’s liberation army has become a force in world class”. In this regard, the growth of the military budget continues. What he is now, hard to say: the Pentagon noted that a number of key articles (like the development costs of new weapons and purchasing weapons abroad) a secret. Officially in 2017 military budget of China is $190 billion, the report estimates the publication Jane’s Defense, we calculate: by 2021, this figure could reach $240 billion we will Remind that the US defence budget in fiscal year 2019 — $716 billion.