In Austria, commented on Putin’s invitation to the wedding of the head of the Ministry of foreign Affairs

MOSCOW, 17 Aug — RIA Novosti. The presence of the President of Russia Vladimir Putin at the wedding of the Austrian Minister for foreign Affairs Karin Kneissl does not affect the foreign policy of Austria, told the news Agency APA, the representative of the Austrian foreign Ministry. 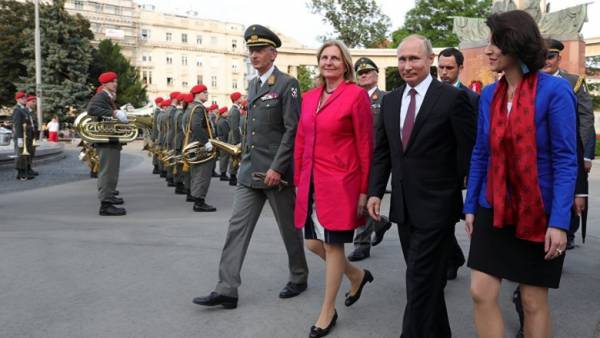 Earlier, the Deputy of Parliament from party “Green” Michel Raymond urged Kneisl to resign. According to him, if the head of the Austrian foreign Ministry will not do it voluntarily, the Federal Chancellor Sebastian Kurz has to offer her resignation to President Alexander van der Bellano.

“First and foremost this is a private event and a private visit, this does not mean no change of foreign policy positioning of Austria”, — said the representative of the Austrian foreign Ministry.

While the Ministry said that Putin’s arrival to the wedding is considered to be a working visit and is accompanied by “an ordinary security measures for the visit of the foreign guest of the state.”