Why Putin’s visit to the wedding of the head of the Austrian foreign Ministry?

What does this mean from a political and diplomatic points of view, to understand Aephi. 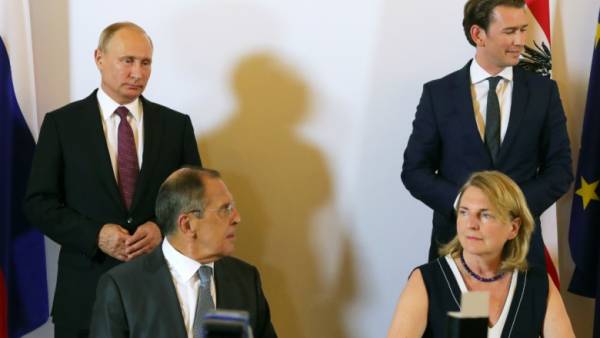 On 18 August the President of Russia Vladimir Putin plans to attend the wedding of Minister for foreign Affairs of Austria Karin Kneissl. There the Russian leader will go at the personal invitation of the bride. Putin’s visit to celebration was confirmed by his press Secretary Dmitry Peskov. He noted that the President will call for wedding Kneisl on the way to Berlin, where he will have a meeting and talks with German Chancellor Angela Merkel.

you need to know about Russian-Austrian relations

We will note, on Saturday, the 53-year-old Kneisl will marry 54-year-old entrepreneur Wolfgang Malinger. The ceremony will take place in southern Styria. At first the pair planned to hold a wedding ceremony in the castle Gamlitz in Styria, but later it turned out that this place is already booked. In the end, the wedding will take place in the winery there, in Styria.

As said Russian presidential aide Yuri Ushakov, the head of the Austrian foreign Ministry invited the Russian President to his wedding during his visit to Vienna in early June. The trip to Berlin also came under this date, the opportunity to get to both events.