Poklonskaya got married in the Serbian restaurant in castropol. Video

Modest white dress, light makeup and only the closest. 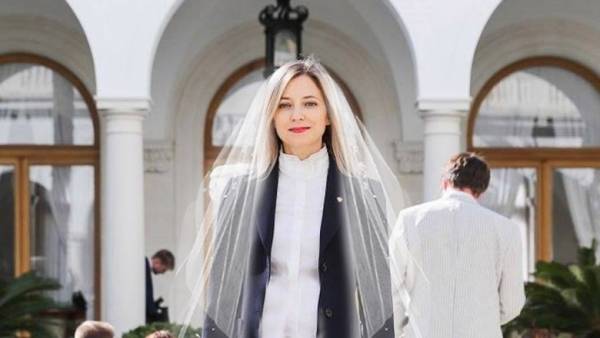 As already wrote “Storm”, the Deputy of the state Duma Natalia Poklonskaya is married to the head of the office of the Commissioner for human rights, Ivan Solovyov. The couple checked in without prying eyes, and later celebrated their wedding in Crimea, surrounded by loved ones.

“The storm,” found that the wedding was held in elite Serbian restaurant “Balkan Grill”, which is located in the resort village of Beregovoye (castropol) on the southern coast of Crimea. In celebration of the young, according to “the Storm”, was attended by 32 people Banquet cost 90 thousand rubles.

The restaurant itself is high-level, with a beautiful view of the sea. Facility’s menu consists of the specialties of the Serbian cuisine. In addition, the range includes seafood from the Adriatic coast.

Why the couple opted on this place — is not clear, but it is worth noting that on one wall of the restaurant hangs a collage of multiple photographs of Russian President Vladimir Putin.

Who is Ivan Soloviev, the husband of Natalia Poklonskaya?

In conversation with the “Storm” Manager “Balkan Grill” confirmed that the wedding (or rather, celebration) actually took place last weekend. But who is Natalia Poklonskaya, he found it difficult to answer. Perhaps because we do not know very well Russian nyash-myash. In the restaurant the entire staff Serbs.

“There was a wedding, but the bride and groom don’t know, ask the owner of the restaurant,” he advised us. And so we did.