More than 100 Newspapers, will hold a coordinated action against trump

The American media combine to give a response to US President Donald Trump, whose rhetoric against the publications is becoming more aggressive. The position of the trump, according to which “media — the enemies of the people” has become the reason for the decline of public confidence in traditional media and violence against journalists. The media had prepared a mass rally to complete “the dirty war”. 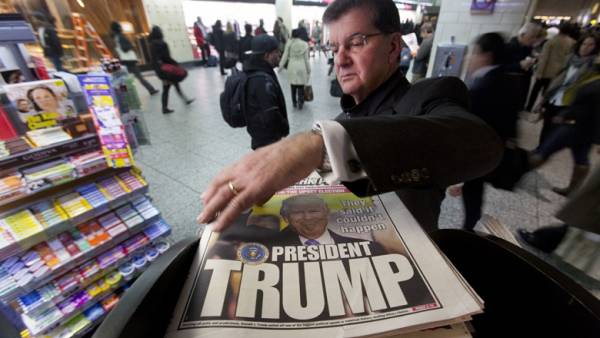 More than 100 American publications co-ordinated, on Thursday to publish editorials in which they will respond to the repeated attacks of the President of the United States Donald trump on the media.

The campaign was organized by the Boston Globe editorial Board which appealed to media across the country asking them to write an editorial condemning the hostility of the President to the media:

This dirty war with a free press should end.

“We will publish on August 16 editorial about the danger of the attack of the presidential administration to media and ask other publications to make the decision to publish their own editorials on the same day. Publications, regardless of their politics, could make a powerful statement teaming up to protect their profession and the important role that the media plays in government for the people and by the people. Our words will be different. But at least we can agree that such attacks on the press are alarming,” — said in the appeal.

Publications that will participate in the campaign can be far more than a hundred. This figure was named editor of the Globe Marjorie Pritchard in an interview with CNN on Saturday, August 11.

It is known that joined as major publications, like the Houston Chronicle, the Miami Herald and Denver Post, while the small weekly newspaper. The campaign was also supported by the American society of news editors.

Action will be the first coordinated response of journalists to the actions of Donald trump, who, with enviable regularity come into conflict with the media and individual reporters, accusing them of publishing “false news”.