Who recovers the vanishing monuments of wooden architecture, and can they be saved. 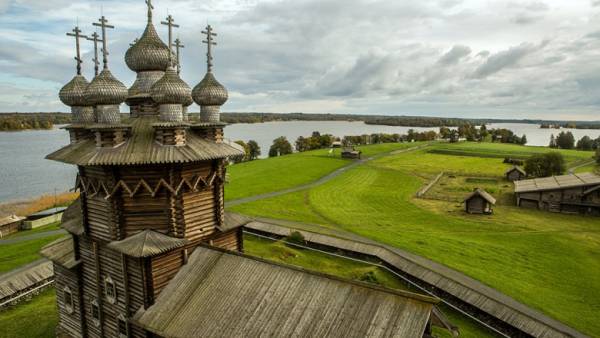 Monument of Northern wooden architecture, the Church of the assumption, built in the seventeenth century, was burned on Friday, August 10, in the Karelian town of Kondopoga. Defenders of the architectural heritage and connoisseurs of culture of the Russian North called the loss of irreplaceable, activists have called attention to the rescue of other such monuments. In the Northern regions of Russia, and still retains several hundred samples of wooden architecture, but most of them are on the verge of extinction. The restoration of them today are mainly volunteers. The legacy of the Russian North, a growing demand for his dying culture and how to save the ancient monuments, the portal iz.ru talked to one of the founders of “String”, dedicated to the restoration of wooden buildings, and the writer released a few years ago the documentary “Atlantis of the Russian North” Gleb Kuznetsovand Director of the film, Sofia Gorlenko.

The burnt Church was built in 1774. She stood on the shore of lake Onega and was the main attraction of the Karelian city of Kondopoga. About first Church built in this place, is mentioned in 1563, after which it was rebuilt several times — this account was fourth. It is believed that put her in the memory of peasants who died during the Kizhi uprising: then, at the end of the XVIII century, the workers located in Zaonezhye iron factories rioted after the news about raising taxes. The uprising was crushed arrived to Kizhi by the order from St. Petersburg punitive detachment.

Later there were built several temples, but to have survived only Church of the assumption. She was considered one of the tallest religious buildings in the Russian North (the height of the Church was about 42 m), and one of the best examples of Russian wooden architecture. It reached its heyday in the XVII century and in XVIII, at the time of construction of the Church in Kondopoga, was already on the decline.

Fire wrote most of the Russian media, Orthodox and architectural web portals. Commented on the fire in the ROC: the press Secretary of the Patriarch of Moscow and all Russia Kirill, the priest Alexander Volkov called the lost Church “the symbol of the Russian North and a masterpiece of domestic architecture of the XVIII century” and urged the Ministry of culture to pay attention to the condition of other similar monuments.

About the insufficient measures taken for the protection of wooden monuments, shortly after the fire, wrote on the website “heritage Keepers”. By estimates of the edition, since 1985, the country burned 45 wooden churches and graveyards (consisting of a complex of buildings).

While in the North it is still possible to find hundreds of wooden churches, chapels, temples and just the old houses, most of which are in dire need of restoration (conservation status are not all of them). Their conservation and restoration are doing for the most part, the volunteers — including expeditions to the North organize funds “String” and “Common cause”. One of the founders of “String” is Gleb Kuznetsov, screenwriter of the documentary film “Atlantis of the Russian North”, dedicated to the history of the local monuments of wooden and those who restore leaving Northern culture. The film was released in 2015.

“People involved in the restoration, I know personally the North”

Gleb Kuznetsov: For me this story (with the restoration of wooden monuments. — Approx. iz.ru) began in 2013, by coincidence. I joined the group, the inspiration of which was the Moscow teacher Margarita Baeva. Of course, it was a unique chance to work with real antiquities, to revive them.

of the Monument has got “Chocolate”

Now the group has grown and operates as a charitable Fund “String”. And I see the interest in the restoration, to the North is growing, the work of community groups becomes more skilled, it engages more people. Someone he goes to the North, some people help with donations.

In fact, this movement is rooted in the 1960-ies, and in different periods it is faded, then rose — it depended on the fate of the country. But completely it does not ever disappear, and therefore we can say that the modern rise is a continuation of an old tradition. Only now it added the participation of the Russian Orthodox Church and the modern phenomenon of crowdfunding.

Card all wooden churches of the North is on the site “Churches.ru”, this report also contains information about their condition. But all the people involved in the restoration, you know the North personally and have a personal relationship with some specific places there. Work on the restoration is a work of many years, so you need to like it to return there over the years, putting their hand in their recovery.

I think the age of great (architectural. — Approx. iz.ru) discoveries in the North is over. But still have the ability to bail one of the famous temples crumbling. However, it is also temporary: the trend is that they will either be restored or completely rot.Gleb Kuznetsovskaya, one of the founders of “String”

About the attitude of the locals:

— It varies, but most often the care of these monuments — business enthusiasts. Most people are very friendly, but they do nothing. A significant part of just still occurs and irritation.

One taxi driver in the beautiful city of Kargopol told me literally: “Even if these churches were not at all!” Simply because due to architectural standards could not build a house in three floors — why did he have such a house and what means he would have built if not for the earnings from the tourists, the man thought.Gleb Kuznetsovskaya, one of the founders of “String”:

— But in General the main problem of the North is that people mostly believe that their world ends with a fence and roads in their villages, churches, playgrounds and the like it someone else should do. Previously, it certainly was not: all of these churches together to build the peasant community. Now communities there, so people can do anything, all: mesogobius large corporations to the state.