Contractors FSO subordinated to the head of “Forum”

Dmitry Mikhalchenko was accused of creating a CV for misappropriation of funds in Novo-Ogaryovo. 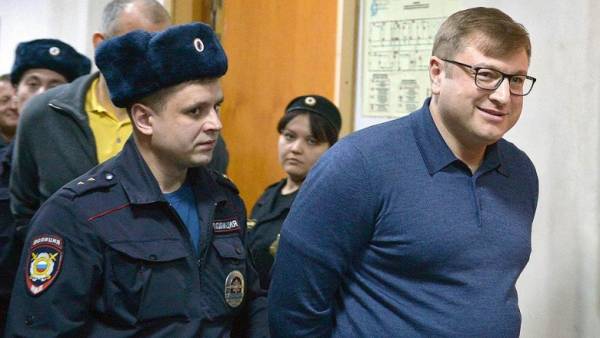 As it became known “Kommersant”, the TFR was charged with the final drafting of the defendants in high-profile criminal case about large-scale embezzlement committed in the construction and repair of objects of the residence of the Russian President in Novo-Ogaryovo. At the final stage of the investigation, have even greater resonance: the investigation concluded that the head of criminal community, engaged in frauds with budgetary funds, stood the famous St. Petersburg, the billionaire head of the holding company “Forum” Dmitry Mikhalchenko, the amount of damage in a criminal case has increased from 225 million to about 1.3 billion rubles.

The final charges of creating an organized criminal community (OPS, article 210 of the criminal code) and embezzlement committed in an organized group, in especially large size (part 4 of article 160 of the criminal code), according to sources, “b”, was brought to the head of the holding company “Forum” Dmitry Mikhalchenko a week ago. A similar charge was brought against and other defendants in the investigation — former head FGUP “Ateks” the Federal guard service (FSO), Andrei Kaminov, top managers of the company “Stroyfasad” (part of “Baltstroy”) Stanislav Kuner and Sergey Litvinov, as well as the former Director of the company “Stroykomplekt” Dmitry Torchynska and entrepreneur Sergey Perevalova. And recently appeared in a new defendant — the head of Service engineering (SIEVE), the Federal security service major-General Igor Vasilyev — only was charged with embezzlement. Yesterday defendants and their lawyers were to begin to familiarize with the case materials. However, when the defenders came to the Central office of the TFR in the Technical lane, they were informed that the start of the procedure is transferred to Friday. The reasons for the investigation did not explain.

A criminal case on the fact of embezzlement of budget funds in the construction and reconstruction of the residence of the head of state (site No. 53) in Novo-Ogaryovo was initiated GSU SKR on March 21, 2017. Initially it was investigated under part 4 of article 159 of the criminal code (fraud in especially large size). Then the investigators and field investigators of FSB have conducted numerous searches in Moscow and St. Petersburg.

The investigation concerned the performance of the contract concluded in December 2012 the Federal security service of FGUP “Ateks” in the amount of RUB 5.7 billion Contract for the construction of the Novo-Ogaryovo reception halls, hotels with gym, commandant, garage, hangar for storage of Park equipment, checkpoint, boiler-house and fencing. The contract assumed and the exercise of supervision over the progress of work.

During the preliminary investigation it was established that the former head of “Ataxia” Andrew Fireplaces for embezzlement of budget funds, attracted a group of construction companies, including “Stroyfasad”, controlled by the head of the holding company “Forum” Dmitry Mikhalchenko. FSO has listed these firms an advance in the amount of 2.6 billion rubles of the Work was to be completed in 2014. Despite the fact that the final timing of the construction was postponed several times, each time the builders were not able to keep within the allotted time. However, as found out a consequence, the portion allocated for working funds were transferred from accounts “Alexa” and “Stroyfasad” one-day firms, cashed and used Kamenevym gentlemen, Kuhner and their associates “in its discretion”. Initially, investigators assessed the damage to 225 million rubles.

In July last year in a criminal case there is a new, particularly serious article 210 (organization of criminal community and participation in it). Then the organizer of the OPS investigators believed Mr. Kaminov.

St. Petersburg billionaire Dmitry Mikhalchenko defendant in this criminal case was not nearly up to its completion. While a year ago it became known that it was separated from another criminal case about smuggling alcohol on which Mr. Mikhalchenko, by contrast, was the main accused. Both investigations, by the way, was led by senior investigator for particularly important cases of the TFR Sergey Novikov. Recall that in “contraband” refers to the fact that starting from 2014 Mr Mikhalchenko and his accomplices illegally imported into Russia luxury alcohol. In particular, in two containers that came at South-East trading company, was the wine, Grappa and whiskey, the cost of one bottle which ranged from 10-50 thousand.

The goods were transported to Russia under the guise of construction sealant. In opened containers, the KGB discovered and exclusive cognac Courvoisier 1912, which costs about 500 thousand rubles. per bottle. Now this case is considered in Basmanny court of the capital.

However, at the final stage of the case of theft when working in Novo-Ogaryovo, the situation changed dramatically. The investigation has decided that the role of the organizer and the head of the OPS, created with the aim of embezzlement of budget funds, is played by Dmitry Mikhalchenko and financial transactions of the attackers was attended by the General FSO Igor Vasiliev, who was entrusted with control over the spending of the allocated budget. In addition, the charges of the investigation excluded the article “Fraud”, having reclassified imputed to the defendants in the act on waste. Sharply increased and the amount of damages in the case — now it is 1,263 billion.