As figures of the “New grandeur” came under arrest

They were talking about politics and shot at cans. Now they are being held in jail on charges of extremism. “Газета.Ru” — how is it that 18-year-old Anna pavlikova and her pals become involved in a criminal case for the creation of extremist groups, “the New greatness”. 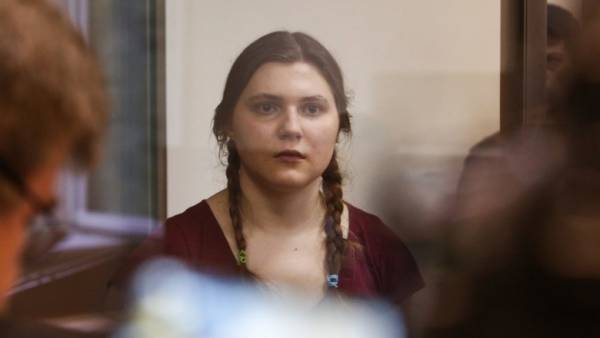 Last week, August 9, 18-year-old Anna pavlikova, her parents and the defenders once again parted with the hope that the girl will be transferred under house arrest. The court extended the period of detention in jail supernumerary case on extremism until September 13. Meanwhile, in reality, a lot of white spots.

On 15 March the Internet-a portal “OVD-info” reported that in Moscow were searched in ten activists of the “New greatness”. There were 14 events, since some had two of address. Then members of the group brought to the Investigative Committee, where they were interrogated as witnesses.

The next day the participants of the “New grandeur” were charged under article 282.1 of the criminal code “Organization of an extremist community” and elected him a measure of restraint. So of the witnesses they moved to the status of a suspect and attached the lawyers assigned to SK.

Everyone but Anna Pavlikova her parents immediately found a lawyer Olga Charles. The case against the girls should be separated because at the time of the crime she was a minor.

If Pavlikova and Dubovik know much about other prisoners — practically nothing. Lawyer OVD-info Alla Frolova, familiar with the case told “Газете.Ru” on some facts of their life.

Kostylenko lived in the city of Bronnitsy, Moscow region. On the day of his arrest, he was 25 years old.

Karamzin 32 years at the time of arrest he was unemployed.

In the grouping according to Frolova, he entered, as he lacked of communication.

Kryukov 20 years, according to preliminary data, he came to Moscow from Noumea. When he opened a criminal case, the young man was a second year student at the law school. He was detained in the hostel. As for Poletaeva, known only to his age — he is 29 years old.

“He brought them, my girls,”Why three sisters killed the father-tyrant. Explains their mother

According to Frolova, information about serious diseases like the girls from the other defendants that are in jail, have been reported.

The other members of the “New greatness” has sent under house arrest for the same two months. This measure received Maxim Roshchin, Sergey Gavrilov, Pavel Cebrowski and Rashid Rustamov.

Because of restrictions that involves house arrest, information about them a little. In addition, parents are unable to communicate with human rights defenders. However, in the OVD-info said that Rosina 39 years old, he’s from Moscow, his interests in court is the lawyer “Agora” Ilnur Sharapov. Gavrilov 25 years, Nebraska 31. Rustamov, August 15, marks the anniversary — he turns 30. The young man lived in suburban Bronnitsy, as Kostylenko. According to Frolova, at the Moscow meeting of the “New greatness” he did not come.

In may, all the defendants in the criminal case, extended the measure of restraint for four months — i.e. until 13 September 2018.

The greatest public resonance was caused by the case of Anne of Pavlikova that in jail celebrated his 18th birthday. During the extension of a measure of restraint in Dorogomilovsky court in may it was recorded numerous procedural violations — it “Газете.Ru” the lawyer told OVD-info Alla Frolova.

Not have heard the lawyers, the girl did not bring and video are not provided. So her lawyers appealed.Alla Polevault OVD-info

On 7 June the Moscow city court returned the complaint to the Dorogomilovsky court due to “irregularities in the organization of the process”. Appeal the Moscow city court considered only on July 26, then violations of the code of criminal procedure Pavlikova reduced the measure of restraint for up to three months, i.e. until 13 August.

However, last week, on 9 August, she extended the detention until 13 September.

In comments submitted to “Газету.Ru” from the UK, it is noted that investigations are still underway. “According to the Chief of investigative management of SK of Russia across Moscow at the present time the investigation of the criminal case against the 10 partners on signs of the crime provided by article 282.1 of the RF criminal code (organization of an extremist community), continues.” Details of the investigation, the IC will not disclose.

Meanwhile it is known that, according to preliminary investigation, the history of the “New greatness” began in late 2017. Then ten young men who now are accused of creating an extremist organization, started to write in telegram-chat “fans Club”.

According to the newspaper “Moskovsky Komsomolets”, the chat was created by the followers of Vyacheslav Maltsev — Saratov politician known for his radical nationalist views and left-wing. He promised to arrange 5 November 2017 some kind of revolution. However, this did not happen, and in the Telegram began to appear chat rooms created by frustrated people.