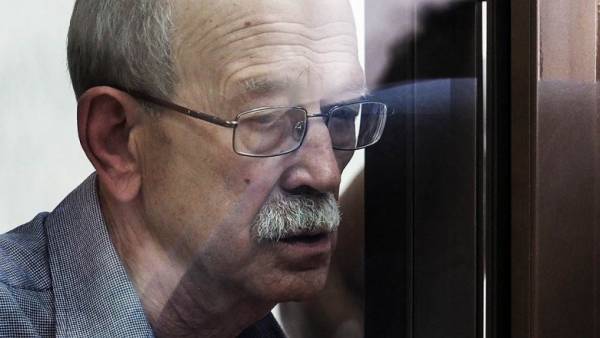 St. Petersburg Union of scientists appealed to President Vladimir Putin asking him to intervene with researcher of Institute Viktor Kudryavtsev, accused of treason. The authors of the open letter point out that 74-year-old scientist held in jail in conditions that “threaten his health and even of life.” They are asking the President to “use authority” to the scientist to court changed a measure of restraint. Earlier, the son of Viktor Kudryavtsev told Kommersant FM that the father because of diabetes can’t eat prison food, and the lawyer complained that the prison administration refuses to transfer scientist necessary medicine.

The St. Petersburg Union of scientists on Tuesday sent to the office of the President of the Russian Federation open letter “with the request to urgently attend to the fate of the leading researcher of FSUE TsNIIMash Roscosmos Viktor Kudryavtsev, accused of treason.” The Saint-Petersburg Union of scientists (SPbSU) was founded in October 1989 by a group of scientists, United in the campaign for the election of academician Andrei Sakharov-the people’s Deputy from the USSR Academy of Sciences. Now SPbSU is an independent non-governmental organization uniting more than 900 scientists; regularly expresses the opinion of the scientific community about social problems.

The authors of the letter say that 74-year-old scientist “suffering from severe chronic diseases, suffered a heart attack, sick of a sugar diabetes of the 2nd type”: “detention in prison threatens his health and even life. For health reasons and in connection with the seizure of his passport he has no way to hide from the investigation”.

Scientists are calling the President “on humanitarian grounds” to check the validity of the charges and the arrest of Victor Kudryavtsev and “to achieve the purpose of him prior to the trial measures of restraint not related to deprivation of liberty and to ensure adequate maintenance of health”.

We will remind, mister Kudryavtsev July 20, was arrested by the FSB and since then is in jail “Lefortovo”. He was formally charged with treason (article 275 of the criminal code). Scientist accused of passing classified information through open correspondence with Belgian Background Karmanovskaya Institute of hydrodynamics, with which the Institute worked. We are talking about the use of hypersonic technologies in the combat missile complexes “avant-garde” and “Dagger”.

Protection of the scientist indicates that Victor Kudryavtsev over 20 years had no access to secret information and “in the new Millennium with the secret data didn’t work”.

In his letter to the President of the St. Petersburg scientists also point out that a project on space exploration that Viktor Kudryavtsev coordinated in the framework of joint European and Russian studies, “was completely open and agreed on all necessary levels.” The project was a “published a public report and a scientific article, which was received permission.”

As reported by “Kommersant”, counter-intelligence officers believe that the scientific correspondence of the scientist with the Belgian Institute was a cover for the transfer of classified information to the secret services of NATO countries, including the United States. Thus they are not confused by the absence of Victor Kudryavtsev of access to state secrets. According to Kommersant’s sources in the security services, his “credibility among colleagues was so high, that for acquaintance with classified information, the special form of permit not required”.

Earlier, the son of a scientist Yaroslav Kudryavtsev in an interview with “Kommersant FM” said his father in jail “feels bad”. “He’s trying to stick to a diet — do not eat foods that are not diabetes. And it’s almost all the products which they feed, — said Yaroslav Kudryavtsev.— Therefore, we are interested, of course, to petition to change the measure of restraint by any means”. The lawyer Evgeny Smirnov has informed “RIA Novosti” that for the first two weeks of detention, Victor Kudryavtsev has lost five kilograms. “In this case, 74-year-old scientist trying to just kill, — said the lawyer.— In jail for not taking the necessary medication and provide virtually no medical care.”