“I suffer in the name of Jesus.” What is known about the pastor, which the United States brought down the economy of Turkey

A trade war between Washington and Ankara have brought down the Turkish economy and put the country on the brink of full-blown financial crisis. Relations between the two NATO allies appeared at the bottom of the 50-year-old American pastor Andrew Brunson. 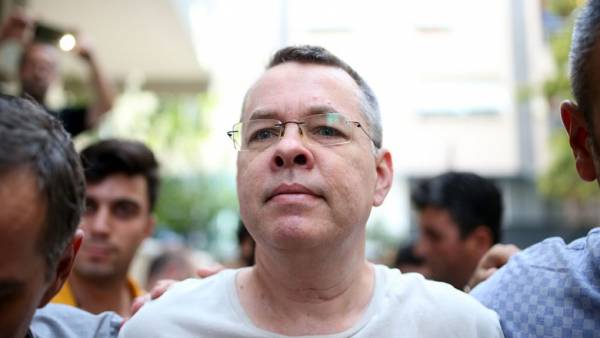 Who is he and what’s the duty on steel and aluminum?

“In Turkey, he had UPS and downs”

Andrew Brunson grew up in the small town of black mountain in North Carolina in a deeply religious family. Branson is the eldest among seven brothers and sisters. His parents are pam and Ron Branson — Presbyterian missionaries who preached in Mexico, Pakistan and Russia. The stories of pam, as a child, Branson almost died from a serious illness: “At that time I was ready to give him to the Lord for his purposes.”

Branson has chosen the path of a pastor and 90-ies moved to Turkey in the framework of the mission of the Associate Reformed Presbyterian Church is a conservative Evangelical community. He settled in Izmir — the third largest population city in the country, together with his wife Narin and three children. There he led the Evangelical Church of the Resurrection with the congregation of several dozen people. In addition, the pastor assisted the refugees from Syria.

According to the sister Brunson Beth Herman, in Turkey the family of the pastor lived very simply: “Barbeque, picnics, swimming, movies and Board games in the evenings. In a sense, this is a typical American family, despite the fact that she lives very far away. It seems to me that life in Turkey much has United them, because that’s where they can rely only on each other.”

“Mother Church” of the temple in Izmir is located in Montreat, North Carolina. Community members sometimes visited Branson. According to his friend, the Reverend Edward Brouwer, working as a missionary abroad “is a very difficult task.”

He’s always been very honest and admitted that for 20 years in Turkey he had his UPS and downs. Edward Brouwer

Periodically, he says, Branson was feeling depressed. Sometimes, on the contrary, felt like making progress as a Christian preacher.

“I’m here to suffer in the name of Jesus”

In the summer of 2016 in Turkey there was a military coup attempt. After supporters of Recep Tayyip Erdogan was able to suppress the rebellion, the country began a massive crackdown on alleged supporters of the overthrow of the President of Turkey. Two years in the country on suspicion of involvement in the coup were arrested more than 60 thousand people, and more than 160 thousand civil servants and military were fired.

to Get the preacher. As one man helped to embroil Turkey with the world

Responsibility for the organization of the rebellion, the Turkish authorities impose on Fethullah Gulen — one of the most famous Islamic preachers in the world. In Ankara, Gulen and his supporters are called terrorists, the preacher among the most wanted men in the country.

Gülen since 1999 lives in the United States in self-imposed exile. After the failed coup, Turkey demanded from the American authorities to extradite the Imam, however, the U.S. refused to do so, citing a lack of evidence that Gulen is involved in any terrorist activities. The Imam condemned the coup and rejected accusations of involvement in his organization.

In Turkey itself at this time continued arrests of people who, according to the authorities, were associated with the Gulen movement. In November 2016 on this suspicion he was arrested, Andrew Brunson and his wife Narin. The wife of the pastor was released after 13 days, he was left in prison — now he faces up to 35 years in prison.

According to the Turkish Prosecutor’s office, Brunson was in contact with Fethullah Gulen was received from abroad the money which was going to conduct subversive activities. The indictment States that the pastor was also engaged in military espionage under the guise of a missionary.

Anonymous witness argued in court that the priest was preaching among the parishioners the idea of creating a Christian movement among the Kurds and the state based on it.

Branson refuses to admit his guilt. Last autumn Turkey has proposed to exchange it for gülen, however, American authorities still refuse to extradite Islamic preacher. “The disciples of Jesus suffered in his name, now it’s my turn. I’m an innocent man. I deny all accusations. But I know why I’m here. I’m here to suffer in the name of Jesus,” said Branson, speaking in court.

“I am discouraged. Pray for me”

Release Brunson from the moment of his arrest claimed many Christian organizations and NGOs. The American center for law and justice, which helps the pastor with counsel, considers the priest as a political prisoner. The organization also expressed concern because of the psychological and physical condition of Branson.