Why the Caspian sea is neither a sea nor a lake?

The heads of five States signed the Convention on the legal status of the Caspian sea. 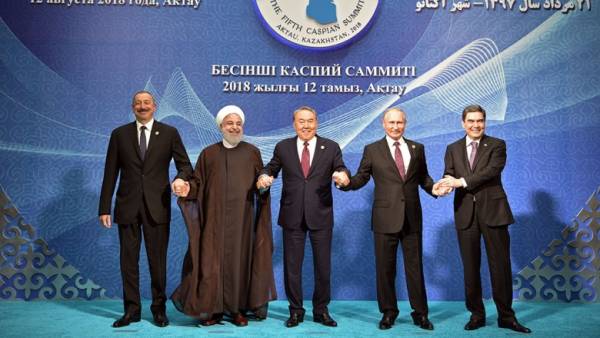 Sunday, August 12, in Aktau, Kazakhstan, the presidents of Azerbaijan, Iran, Kazakhstan, Russia and Turkmenistan signed the Convention on the legal status of the Caspian sea. Previously his status was regulated by Soviet-Iranian treaties the Caspian sea was defined as a closed (inland) sea, and the Caspian littoral state had the sovereign right to 10-mile zone and equal rights for the remainder of the sea.

Now, according to the new Convention, each country fixed its territorial waters (the zone width of 15 miles). In addition, to the Caspian sea will not apply the provisions of the UN Convention on the law of the sea 1982, the sea bottom to be classified into sectors, as is done in neighboring seas, and the sovereignty over the water column to be set on the basis of the principle that it is the lake.

Why not consider the Caspian sea nor lake, nor sea?

The second feature that distinguishes seawater from the lake district, is their high salinity. The water in the Caspian sea is really salty, but salt in its composition, it occupies an intermediate position between the river and the ocean. Moreover, in the Caspian sea, the salinity increases towards the South. In the Volga Delta contains from 0.3‰ salts, and in the Eastern parts of the southern and Middle Caspian sea, the salinity of up to 13-14‰. And speaking of the salinity of the World ocean, it is on average to 34.7 ‰.

Due to the specific geographical and hydrological characteristics of the reservoir received a special legal status. The summit participants adopted a decision according to which the Caspian sea is a landlocked body of water that has no direct connection with the World ocean, and therefore can not be considered a sea, and at the same time because of their size, water composition and characteristics of the bottom can not be considered a lake.