Putin did not give instructions for response to the new sanctions, Peskov said

MOSCOW, 13 Aug — RIA Novosti. Russian President Vladimir Putin has not given any indication about the parameters of the response to new U.S. sanctions — until they are introduced, it’s premature, but we can say that the fundamental for Russia in this case will be the principles of reciprocity and of reflectivity, said press Secretary of the head of state, Dmitry Peskov. 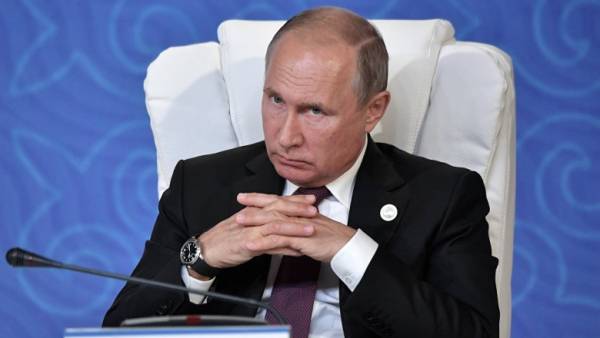 “Here in this case it was about the fact that the fundamental principle is the principle of reciprocity, the principle of reflectivity, often in such situations. As for some instructions, of course, not yet given, because while, say, was the announcement of new sanctions was the information about what the package is prepared or already prepared, but they have not yet introduced”, — said Peskov told reporters in response to the question of whether to give the President any guidance as to what will be Russia’s response to new US sanctions.

And, of course, without accurate information regarding which another restriction came up with Washington to talk about some of the answers would be probably incorrect.Dmitry Pescovitz Secretary of the President of the Russian Federation

The US administration on Wednesday announced new sanctions against Russia over its alleged use of chemical weapons in the British Salisbury. According to sources, the channel NBC, the first package involves a complete ban on exports to Russia of electronic devices and components, dual-use, the second package may include a decrease in level of diplomatic relations, a ban on flights in the United States, “Aeroflot” and the almost total cessation of U.S. exports. Russia may avoid a second wave of sanctions, if guarantees the non-use of chemical weapons in the future, noted the state Department.

In addition, earlier in the American Congress a bill was introduced with a whole set of anti-Russian measures, including sanctions against a new state debt of the Russian Federation and state-owned banks. RIA Novosti interviewed experts noted that state-owned banks wording in the document is vague, so potentially it can lead to a ban on payments in dollars that would be very painful for banks and the ruble exchange rate. However, they pointed out that the bill might be seriously adjusted or even not accepted.