Moscow. August 13. INTERFAX.RU — Turkish President Recep Tayyip Erdogan accused the U.S. of trying to put Turkey “back blow”, despite the fact that Turkey is an ally of Washington and NATO, local media reported. 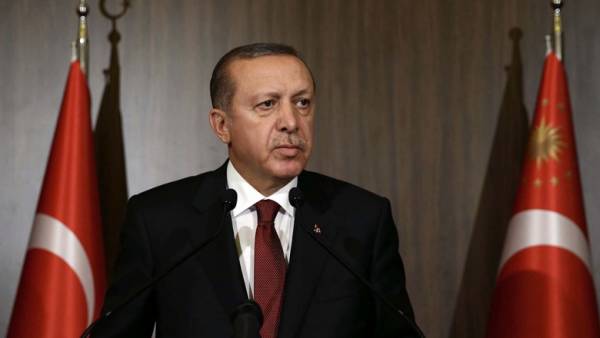 “Together we are part of NATO, but you are trying to stab in the back their strategic partner. Is such a thing permissible?” Erdogan said, speaking at the 10th conference of Turkish ambassadors in Ankara.

On the one hand you act as a strategic partner, and with another — shoot bullets at the legs of his partner.Recep Tayyip Erdgasproduzent The Turkey

The Turkish leader also noted that the current pressure on Turkey is a reaction to some external forces on an independent policy of Ankara. According to him, the main purpose of such actions is to force Turkey to abandon the protection of its interests.

Erdogan has called the current situation an “economic siege”, and the problems of the Turkish currency, the result of the “attack” on Turkey.

However, he urged citizens not to worry, assuring them that the Turkish economy is “solid and strong” and will remain so.

The relationship between the US and Turkey deteriorated after the U.S. decision to impose sanctions against two Turkish Ministers from being held in detention in this country, the American pastor Andrew Brunson. Then the President of the United States Donald trump announced the doubling of duties on steel and aluminum for Turkey, this statement caused the collapse of the national currency of Turkey is Lira.

Read also: Putin has promised to go with Erdogan when Turkey’s meat from Russia