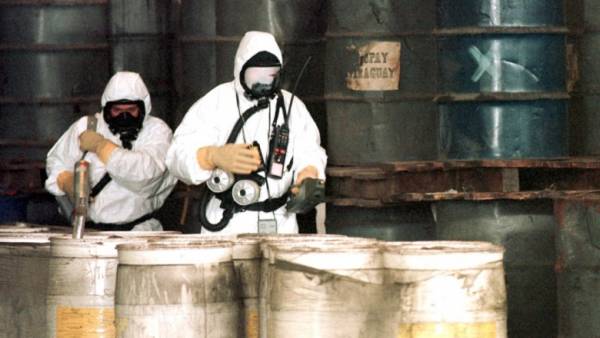 Nuclear power Europe is experiencing a systemic crisis. The focus of the European debate includes not only nuclear power plants, the continued existence of which is increasingly put to the vote: to be or not to be? The problem lies elsewhere. Regardless of the answer grows more serious and long-term ambush — disposal of radioactive waste. Details — in the material of the portal iz.ru.

A kaleidoscope of ideas

What to do with spent fuel for nuclear power plants — the answer to this question, scientists are looking for the same moment came the idea to make the atom work for the good of mankind. Plans were put forward very different. For example, American specialists were invited to shoot nuclear waste of space in the Sun: extra small nuclear explosion the light would be just not noticed. The project implementation was not possible because of the enormous estimates: 1 kg of any cargo to deliver into orbit costs not less $10 thousand And in the United States nuclear stuff accumulated already 70 thousand tons.

One of the German physicists in the 1950s, the years toyed with the idea of Antarctic storage. In his mind, the containers of testing should be thrown out of airplanes over the White continent: the fuel is hot before it is finally buried, needs to cool for several decades.

Antarctica — natural freezer of the Earth, and the road to it. It is convenient that there are no graves in the thick ice to break it is not necessary: hot container will melt itself around anything, gradually fall to the ground and subsequently cooled down, drag on top of the ice again.

The project failed because of concerns that the ice melts too much — rising sea levels that will cause a lot of unpleasant consequences in the form of floods, flooding, collapses of buildings too close to the coastal edge, etc.

In the 1980-ies started talking about the capabilities of the device the disposal of nuclear fuel in above-ground bunkers. But it turned out that the wind and moisture outdoors will destroy the premises of the stores much faster than groundwater. And this idea was accepted only as a temporary.

For the next 40-50 years, during which, first, the spent fuel will be cooled in surface storage (up to temperatures at which the possible long-term final disposal), and secondly, during this time, science will create something eternal.

“The flagship European nuclear energy”, “sample nuclear safety”, “country advanced energy technologies” — which of these definitions apply to any France, any will be correct. However, in the state, with 58 nuclear reactors that produce 75% of the domestically produced electricity in another way and shouldn’t be. And therefore quite naturally that the storage of nuclear waste in France, too, all at the highest level.

To say that to you though, because nobody in the world ever complained champagne from Thierry Fournier, which is made from grapes growing just 10 km from the largest repository of radioactive waste.

Yes, in France, as in other EU member States, active green, occasionally podlivaya people to rallies and demonstrations against the peaceful atom. But, in fairness, we note that the performances discontented and dissenters here is not so numerous as in neighbouring Spain.

Perhaps the effect still explanatory work carried out by the National Agency for radioactive waste management (ANDRA). The state Agency — 650 people, including 400 professionals with advanced degrees who know how to talk to people in a language they understand.

Yes, and the virtual absence of emergency situations related to storage of nuclear waste, also adds green problems finding pain points in the nuclear industry of the country.

France was one of three countries in the world, took the decision to build the eternal storage for the waste. It in this list were Sweden and Finland.

— All existing cemeteries are intended for the temporary storage of waste. No country has a geological repository for the permanent or at least long-term storage, — says the head of the press service of IAEA Giovanni Verlini.

The total number of accumulated radioactive waste experts of the organization can be determined only approximately. By 2022 this will amount to 450 thousand tons. Giovanni Berlingua the press service of IAEA

Most of this “good” chemical elements with long half-lives. Such, many generations of our descendants not to wait until the process is completed. Here for such waste and will be built underground geological repository near the village of Bures (province of Meuse).

The project, called Cigeo, was postponed several times due to the occurrence of the necessity of obtaining any new data, but overall, the message about closing the program never went. The boldest forecasts, the vault at Bures should work in 2025.

According to scientists, to organize the underground eternal, that is rated for at least 100 thousand years of storage of radioactive waste (radioactive waste. — Approx. ed.), the most suitable four rocks: granite, clay, sand, and salt.