Dmitry Medvedev has compared the pension reform with a bitter medication

Prime Minister of Russia Dmitry Medvedev during a meeting with the staff of the Kronotsky reserve in Kamchatka has said that the bill on pension reform is a painful but necessary measure. According to the Prime Minister, the President of Russia Vladimir Putin will also Express their opinions in the final stages of debate. 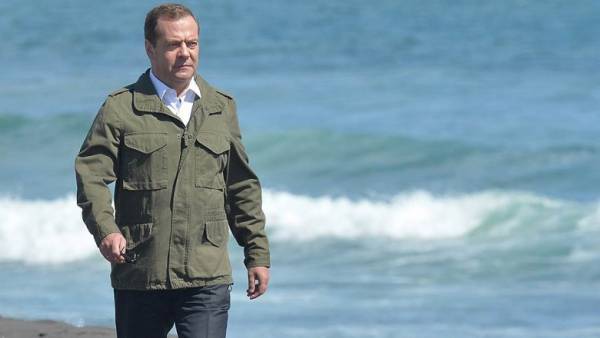 Prime Minister of Russia Dmitry Medvedev during a meeting with the staff of the Kronotsky reserve in Kamchatka has said that the bill on pension reform is a painful but necessary measure. “This is now the most difficult question which is causing great debate in society. Such changes in the pension legislation, even if the person wants to work, most people are not happy, — quotes the Prime Minister TASS.— As rightly noted by Vladimir Vladimirovich Putin, no one is pleased with and among members of the government.”

There are decisions that for various reasons needed. It’s like bitter medicine. People do not want to drink it, but realizes that if he this medicine do not drink, you could end up much worse. Also these changes.Dmitry Medvedev Prime Minister of Russia

On 16 June the government submitted to the state Duma a draft pension reform under which the retirement age of Russians is proposed to increase to 65 years for men (from 60) and 63 years for women (from 55). Despite numerous protests, on July 19, the state Duma adopted the bill in the first reading. After that, Vladimir Putin said that he does not like none of the government’s proposed options, sparking discussion about the possible mitigation options for reform. It is expected that the bill will be passed in the final reading this fall.

See also: the CEC has agreed on three issues of the pension referendum