Mechanical brush-scratcher like the cows do not less food

Cows have a strong need for mechanical brushes through which the animals are itching for them, they are ready to overcome the same obstacles, and for food. The study about it was published in the journal Biology Letters, also about it writes New York Times. 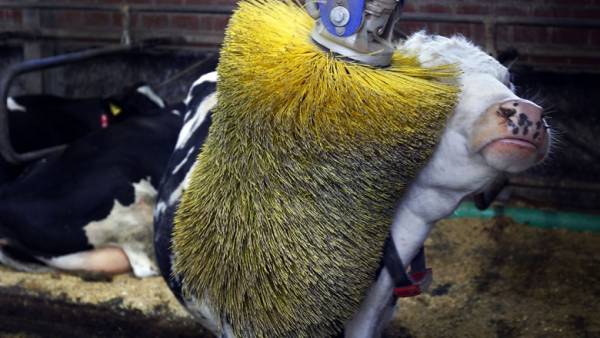 In free range cows, like many animals, often scratched on trees and other vertical surfaces to get rid of parasites, dead skin cells and dirt. The dairy cows that live in stalls, this is not possible, and in some countries it is customary to set pet special brushes, which rotate, when to touch them. In Denmark these brushes are obligatory for all the buildings.

Named the reason of love of cats to boxes

Marina von Keyserlingk (Marina von Keyserlingk) from the University of British Columbia in Canada and her colleagues decided to find out what the cow is ready for scratching. To do this, they built the gate of the corral with different weighting — to open them, it was necessary to move the load. 10 healthy pregnant Holstein cows were taught to open the gate, behind which was the food, mechanical brush or nothing.

The scientists gradually increased the weight to understand at what point the animals will give up, and thus to assess the relative importance of what is behind the gate. “Cows are equally worked hard to get to the food and to brush less hard and interested in nothing. These results indicate that cows are highly motivated to obtain access to a mechanical brush, and it is important for resource”, — says the article.