MOSCOW, 8 Aug — RIA Novosti, Anton Skripunov. About where the cross of Christ, still arguing scientists, politicians, and believers. Some argue that it is important for Christians event occurred in the West Bank, others on the East. Anyone have any arguments — in the material RIA Novosti. 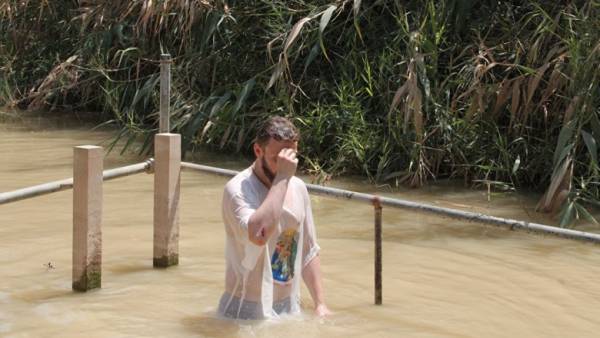 For more than four years Nina Procutllc, a native of the Khmelnytskyi region of Ukraine, working in the Russian pilgrims ‘ house in Jordan, sacred to the believers of the river, which gave the name to that state.

I thought I would come here just for a month. But, being here felt so happy that I have tears already gone! Could not imagine that I will be here to pray for themselves and for the whole world.Nina Procutllc

Every day from early morning to late evening Nina performs many tasks that take a lot of effort. But she still manages three times a day with a prayer to plunge in the biblical river.

the Test of faith: myths about the baptism of Rus

The pilgrimage complex of the Russian Orthodox Church, which in 2012 was opened by President Putin and king Abdullah II of Jordan, is daily visited by dozens of pilgrims and tourists. Stop here, even the Americans and Canadians. And the Church of St. John the Baptist can meet Muslims, including Iraq and Syria — it’s also a place to remember.

But worth a look in the guides, as confusion begins. The same and in scientific works. Moreover, according to the scientists, the problem arose in the first centuries of Christianity. The earliest Greek lists of the gospel: the baptism site of Jesus called the place “a True samogonka” that is located on the East coast (in present-day Jordan). A Christian thinker of the III century, Origen, who knew the tradition about Christ, on the contrary, says on the West Bank (modern Israel).

So today pilgrims visit two places: the Qasr El-Yahud on the West side of the river and al-Maghtas on the East.

The place of the prophets

The baptism of Christ — one of the first episodes of the gospel story. According to Scripture, when Jesus had reached the thirtieth year, in the Judean desert was preaching John the forerunner (the Baptist). And the whole “Jerusalem, and all Judea and all the region round about Jordan” came to him to confess their sins and be baptized in the Jordan. Came and Jesus.

“I baptize with water; but among you stands One Whom you do not know. He comes after me, but That was ahead of me. I am not worthy to untie His sandal strap” — so, according to the Evangelist John, the Baptist responded to the approach of Christ.

The place of the baptism of Christ in the gospel is mentioned only once:

This happened in Bethabara beyond Jordan (Jn. 1:28). The True name of the town (Beit Abara) translated from Aramaic — the language of Christ and John the Baptist as “the crossing of the prophets.”

According to Jordanian archaeologist Rustom of Mcana, the reason John baptized the Savior is here. “As you know, near the Jordan is a hill which, according to tradition, Elijah the Prophet was taken up into heaven. And the cave where he lived John the Baptist. The locals even thought it was Elijah returned to them. Besides John preached exactly the same place where Elijah, on the Eastern side of the Jordan. In his time this place was considered safe, because there were no Romans,” says the researcher.

The biblical tradition gave researchers the first clue. And to find the exact spot of the ascension of the prophet Elijah — Jabal Mar Elias — helped Russian monk.