MOSCOW, 8 Aug. /TASS/. The Central election Commission of Russia at session on Wednesday, August 8, for the first time in 25 years approved proposed questions to put to a nationwide referendum in three different initiative groups. This was announced by the Chairman of the Commission Ella Pamfilova told reporters. 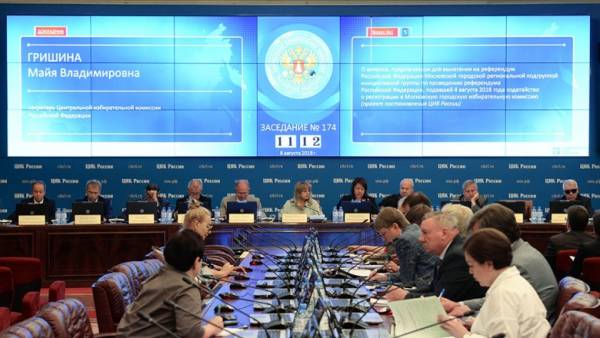 “So for the first time in nearly 25 years, CEC has approved several issues for possible submission to a referendum. Now it is a collection of documents of the initiative group”, — said the head of Department.

The CEC at a meeting on Wednesday acknowledged the relevant law, the wording of the questions, which three are independent from each other, the initiative group created by spravoross Ilya Sviridov in Moscow, volunteers in Moscow and the Communists in the Altai region, I propose to put to a nationwide referendum against raising the retirement age.

The question of the initiative group, established in the capital the head of the municipal district Tagansky, the candidate in mayors of Moscow from “just Russia” Ilya Sviridov, worded as follows: “for You to the age established by the legislation of the Russian Federation on pension provision as at 1 July 2018, at which there is a right to pension for old age, not changed?”.