Maduro called the target of the assassination attempt on himself

MEXICO city, 8 Aug — RIA Novosti. Venezuelan President Nicolas Maduro said that the purpose of the assassination attempt on him was to plunge the country into violence. 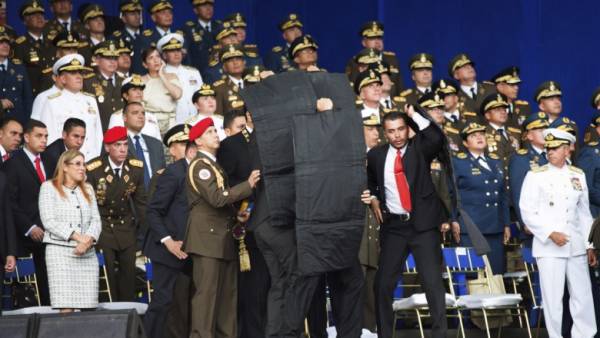 According to Maduro, he personally saw the drone that was sent by the conspirators to the podium. “He flew with a great noise over our heads. I kept talking, and at some point, the drone begins to move to the presidential podium. It is a question of seconds when he was in front of us, ready to kill us,” he said.

Maduro also showed a cap of one of the soldiers punched an exploding charge of the drone, and showed a metal ball with traces of blood, which was shot in the head by one of the soldiers. “It was against me and against you, it was a terrorist act, an assassination attempt,” he said.

According to him, only had two groups of terrorists who drove the drones, one of them trained in the city Chinakote in the Colombian Department of Norte de Santander.

Maduro also said that the first suspects were detained 10-15 minutes after the attack. “I call the Minister (of internal Affairs Nestor) Reveral: we caught two suspicious person control for drones that could be associated with the assassination. After a few minutes to catch the second group. Then we calculate the financiers and organizers who led the groups,” she said.

He asked for help from citizens in catching those participants in the attack, which is not delayed, as with “national intelligence” has already been calculated and arrested several people. “Locals saw strange activity several machines from which came strange people and launched drones,” said Maduro.

The Venezuelan leader also accused of involvement in the assassination of one of the opposition leaders Julio Borges and Deputy of the National constituent Assembly (Parliament), Huang Recasens. He called on the US government and Colombia to provide information on involved in the attack on him.