MOSCOW, 8 Aug — RIA Novosti. Scientists have found in the Pavlovo-Posadsky district of the Moscow region clay jug with silver coins of time of Ivan the terrible and Boris Godunov. 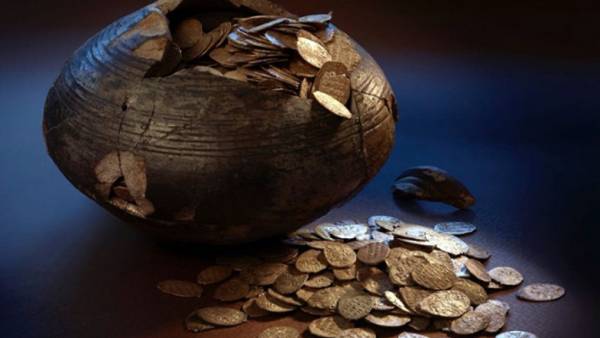 She helped to uncover some interesting details from the history of Economics of the Russian state at the time of the last Rurik, the press service of the Institute of archaeology RAS.

This treasure was a surprise even experienced professionals. Its uniqueness lies not only in the large size and unusual composition, but in its integrity.Asya Aroutiounian Director of the Institute of archaeology RAS News

“Not one coin was lost, as they were found where 400 years ago, they buried the master,” — says Asya Engovatova, Deputy Director of the Institute of archaeology Russian Academy of Sciences in Moscow.

Suburban expedition of the Institute found an earthen vessel with six hundred silver coins during excavations that were carried out before the construction of one of the roads in the Pavlovo-Posadsky district. Once there was located the village, which tells of the peasant origin of the treasure.

The researchers believe that the settlement on this place existed since pre-Mongol times until the nineteenth century. A fairly large village with an area of several thousand square meters was opened in 2015 during a historical and cultural examination before the construction of the motorway Moscow — Nizhny Novgorod — Kazan.

As scholars have noted, almost 98% of coins found in the pod, refer to the period of the reign of Boris Godunov (1598-1605). This suggests that the treasure buried at the beginning of the XVII century, in the years 1601-1603, shortly before the time of Troubles.

The integrity of the findings allows to reconstruct the complete picture of the life of the settlement and partly of the owner of the treasure. It is now clear that the peasant’s standards he was a wealthy man: the treasure was buried in the yard where there was a glacier with a stone lining the walls, and stood next to a large residential house.

All in the jug, archaeologists found 6 rubles 23 kopecks. In those days it was quite a large sum, which could build a house or to purchase a working horse and cow.

The size of the treasure in the Large Courtyards of two to three times more than usual “peasant” treasures of the last Rurik, in which from one hundred to three hundred silver copecks.

As the researchers suggest, the treasure could be collected as a result of successful trading operations — for example, sales of the crop. For example, in the years 1602-1603, after two years of poor harvest, bread prices in Moscow rose more than 20 times. It is possible that the owner of the hoard managed to take advantage of this price spike and bummed a large number of new minted coins.

In addition, the large size of the treasure can reflect one of the interesting details of the time — “inflation silver”. The fact that the main source of this metal in the XVI—XVII centuries became the silver mines discovered by the Spaniards in the American colonies. The inflow quantity of silver in Europe and Russia made him less valuable in the eyes of the common people of the time right about the time when I was buried the jug.

What happened afterwards, scientists do not know, except that the owner or killed, or could not return to the village. It is possible that he was the victim of the time of Troubles, but there are other possible scenarios for his disappearance — of the disease, attacks of bandits and other troubles that are not associated with political instability and wars.